On this special edition, 7-day tour inspired by the Peloton Magazine article we explore the best wine production areas of Piedmont and the coastal region of Liguria with a final ride to Sanremo. The ride is about Italy's race cycling heritage with stops at Castellania (birthplace of Fausto Coppi), at Museo dei Campionissimi, and with a Milano-Sanremo ride.

Beppe Salerno, co-founder of Tourissimo and a native of Piedmont, has designed and will lead this tour. He cannot wait to take you on "his" rides.

Great meals and wine will fuel our rides. The Langa and Monferrato hills of Piedmont are in one of the most important wine production areas in Italy and received UNESCO World Heritage status in 2014. The Piedmont portion of the tour will take us to the heart of these regions, over rolling hills covered with endless vineyards and past ancient castles and hidden hilltop hamlets. You’ll see how connected the local people are to the land, and how they take pride in everything they produce.

The hills of the Piedmont wine country

Liguria is known in Italy as a great destination for cyclists, thanks to its beautiful winding roads, stunning views, and mild weather. Western Liguria is characterized by resort towns such as Finale Ligure and Sanremo (yes, the one of the famous Milano-Sanremo classic cycling race). We explore the gorgeous Riviera delle Palme (Palms Riviera) and Riviera dei Fiori (Flowers Riviera) - major destinations for Italian and European tourists since the early 1950s. This unique region is a beautiful maze of fortified medieval villages and small fishing towns with strong connections to the north and to Piedmont, and deep traditions of sailing, fishing, and trading on the Mediterranean Sea. 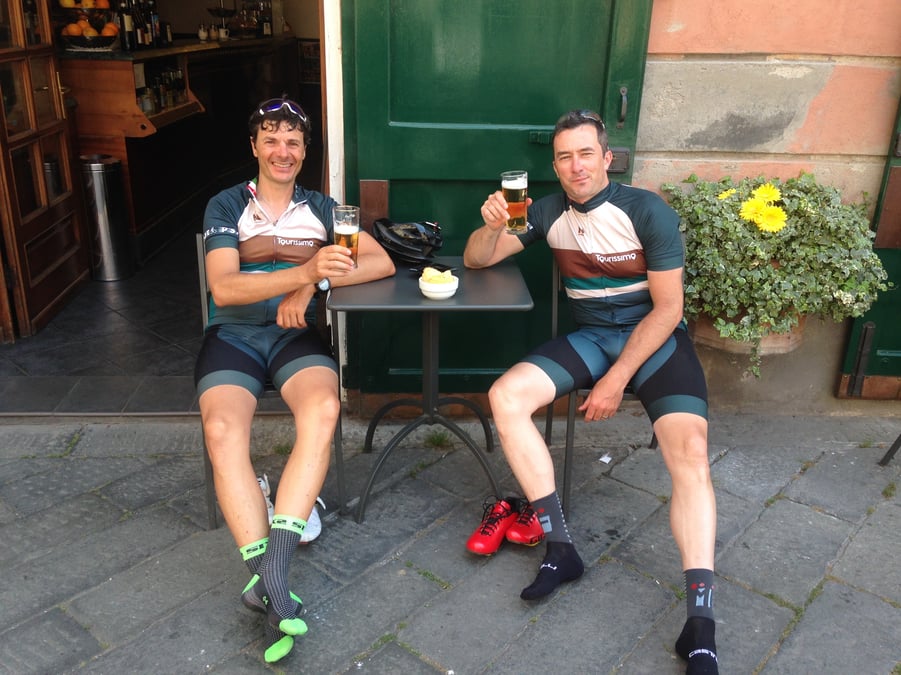 Beppe and Clive made it to Finale Ligure. 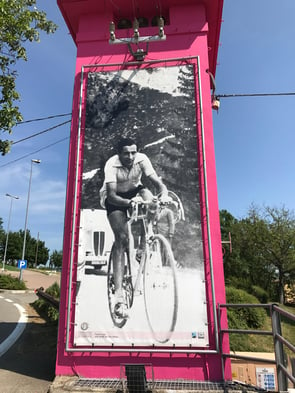 We loved taking Peloton Magazine to the Village of Castellania in Piedmont, home of the Campionissimo, Fausto Coppi.

The 37th Milano-Sanremo took place in 1946 in an Italy with plenty of scars from the war but eager to get back to normal and to get back to bike racing (the most popular sport at that time). It was the first edition after WWII and 115 riders started from Milan for the 293 km classic. Coppi and a few others attacked immediately. Teisseire and Coppi climbed the Turchino pass together but the french rider was soon dropped. The Campionissimo continued alone for 151 km and won with a margin of 14 min over Teisseire and 18:30 min over his rival, Bartali. After a 286 km breakaway he finished in 8 hr 09 min at an average speed of 24.6 mls/hr.

Joining us on this cycling vacation is a unique chance to ride new, exotic roads steep with Italian cycling heritage. Peloton Magazine inspired us to design a multi-day ride perfectly suited to the intermediate rider that enjoys the perks of a fully supported bike tour and who wants to embrace some Italian "bella vita" among vineyards and the riviera beaches. Rides range from 35 to 70 miles a day with plenty of rolling hills and some longer climbs. Ready to chase the ghost of the Superchampion on his training roads and on the way to Sanremo? 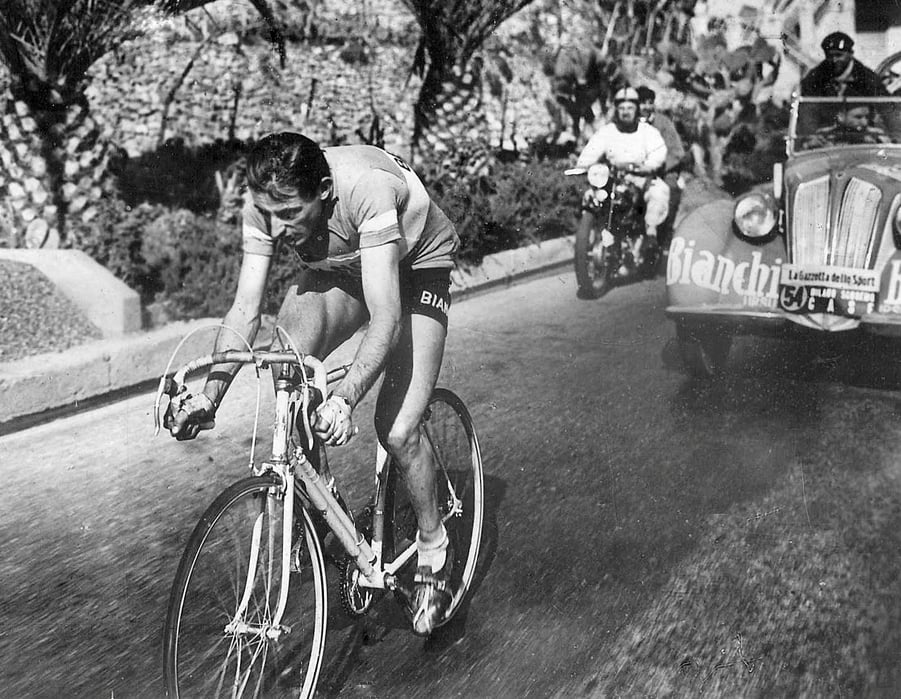 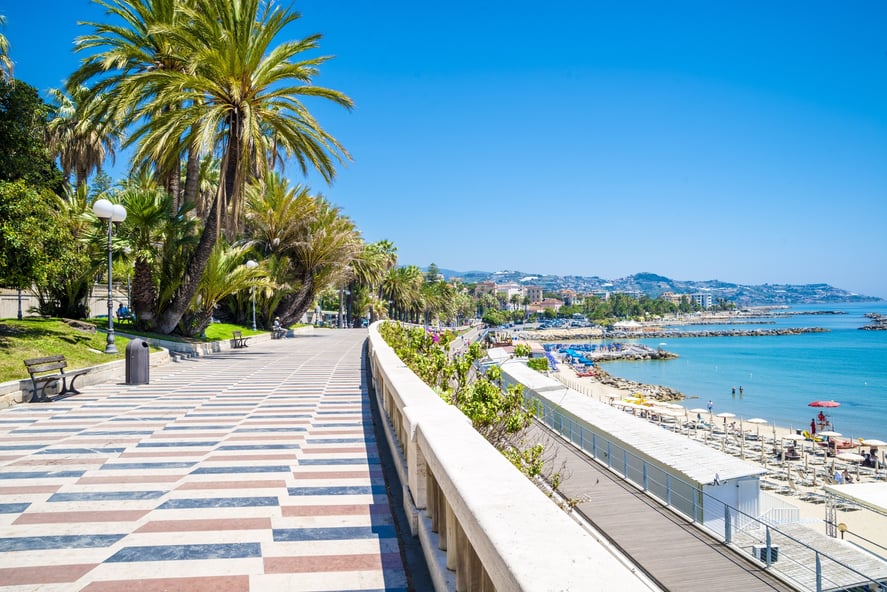 This is the second trip with Tourissimo that we have taken. This trip was an 11/10!!. I have been to the Piedmont region before and it is magical. The food and wine (obviously with the Barolo wines) is amazing. The trip from the Barolo region through the Apennine is without compare. They massive and gorgeous, with green everywhere, sparsely populated with amazing little towns dotted throughout. Castles, streams, lakes, very little car traffic, beutiful chesnut and other forrests, nocciolo forrests. There was a little feeling of Switzerland but with the people, food and drink of Italy. Then, to top it all off you arrive at the Ocean in the amazing towns of Liguira Finale, Laiguelia and San Remo. The Italian riviera is spectacular. The mountains come right down to the ocean with stunning white marble and green hills. This is not a ride for beginners for sure, but the climbs are steady and can be done by people who train and are not professionals (speaking from a recreational 55 year old rider). That said there is a lot of the days spent on the bike, which we throughly enjoyed. The food and accomodations were perfect. Loved the bike hotel at the end, great mix of people from all over the world. BEST TRIP EVER!!!

An opportunity to experience Italian culture from atop a bicycle should be embraced with zeal; particularly if it comes in the company of Piemontese who the place like the back of their hands. Beppe Salerno, owner operator of Tourissimo; meets me at the terminal in Turin and we head straight for the hills of Gavi. Our first stop is the resort at Villa Sparina in Monterotondo. A breathtaking yellow inn, dating to the 18th century, perches above picturesque estate vineyards where the local white grape grows. There are few things that help with jet lag like a ride, so we head out for a short one, following the pedal strokes of a local boy who would become an international icon.

These days the steep climb up toward Castellania is smoothly paved but it’s not too hard to imagine the rough roads of the early 1930s that greeted a young Fausto Coppi pedaling from his family’s home to the butcher shop where he worked in Novi Ligure. The roadside is marked with classic black and white photos of Il Campionissimo and a mural of him and his brother and teammate sits on the road between his family home and a monument to his legacy. Castellania, population ninety-two, is a fair bit sleepier than it was in Fausto’s when the population bordered on five hundred. We see maybe two people out on the streets as we head through to the other end of town, towards Coppi family home; which remains a museum in homage to Italy’s greatest champion.

The riding terrain is hilly with some longer climbs that can become more challenging in case of high temperatures. A network of secondary roads departs from the valleys, continues on ridges dotted by sleeping villages, and rolls seamlessly onto more hills and down again into more river valleys.

Almost half of Piedmont can be described as mountainous while most of the remainder is hilly. Liguria, in spite of its "riviera" pedigree, is a mountain region.

The ride will be mostly vineyards on the first three days, then sparse forest, then - after a dramatic pass and an endless downhill - we'll join the windy coast.

Secondary roads are almost unlimited and you can climb for several thousand feet with the Mediterranean at sight. These peaks are actually the Ligurian Alps joining the Apennines and you’ll enjoy astonishing views from the top! In fact, every climb is rewarded with spectacular views. For riders, it's an amazing playground of quiet valleys and medium-difficulty passes. Do not hesitate to contact us if you have questions about the rides.

The Peloton special edition bike tour of lower Piedmont and Liguria will run for private groups of a minimum of 8 on custom dates.

If you love Peloton Magazine and riding in exotic destinations, there’s hardly any trip more rewarding than this itinerary anywhere in the world.