A pioneer in the New York City restaurant scene for his commitment to sourcing locally, seasonally and sustainably, chef Marc Meyer showcases the season’s bounty through his vibrant, ingredient-driven cuisine at Cookshop, Vic’s, Rosie’s and Shuka, the restaurants he owns with partners Vicki Freeman and Chris Paraskevaides. In summer 2019, they’ll open Shukette, a Middle Eastern restaurant in Chelsea featuring a menu of dips and kebabs from Shuka chef and partner Ayesha Nurdjaja.

Meyer began his career in New York in 1980 at The Odeon under celebrated chef Patrick Clark, which laid the groundwork for his culinary philosophy and style. From there, he traveled to Rome and cooked at a 30-seat restaurant where he planned menus around what was available each day at the market, elevating the freshest ingredients with care and precision. Back in New York City in 1983, legendary chef Larry Forgione tapped Meyer to cook at An American Place where he studied traditional American cooking and furthered his interest in ingredient sourcing. Soon thereafter, Meyer secured his first executive chef position at Brasserie Savoy in San Francisco where he learned how to run a successful restaurant and was immersed in the exceptional produce and products available in Northern California. This allowed him to further refine his commitment to seasonal, ingredient-driven cuisine.

Drawn back to New York and inspired by Vicki Freeman’s passion for restaurants, Meyer took the role of head chef at Vix in SoHo in 1993. Meyer then transitioned to ARK Restaurants working alongside chef Jonathan Waxman as co-executive chefs where he supervised restaurants throughout New York City, Washington, D.C., and Las Vegas. Meyer and Freeman married in 1997, and the duo realized their dream of owning their own restaurant together when they opened Five Points in 1999. The restaurant was a NoHo mainstay for 15 years, allowing Meyer to showcase his seasonal cuisine with a Mediterranean influence. With a desire to make his cuisine accessible to the home cook, Meyer wrote Brunch: Recipes from Five Points (Rizzoli) in 2005.

Following the success of their first venture, the duo opened Cookshop in 2005, presenting clean, inventive dishes in the heart of the bustling Chelsea neighborhood, earning two stars from Frank Bruni at The New York Times. They continued to expand and in 2014 Meyer and Freeman added Vic’s and Rosie’s, their respective passion projects, to their family of restaurants. In 2017, they flipped their SoHo restaurant, Hundred Acres, into Shuka, an intimate neighborhood spot inspired by the vibrant setting and flavors of Morocco. In early 2020, they will partner with Nurdjaja once again to open Shukette, a convivial Middle Eastern spot in Chelsea. 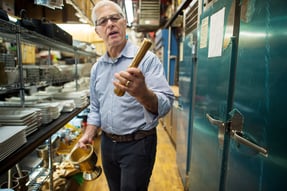