Challenge your body and elevate your soul while you explore a rich mixture of cultures and celebrate a sense of accomplishment on this quest through the heart of the Dolomites.

Experience dramatic mountain beauty and fairytale towns in the Italian Alps. Each day during your ride you’ll be surrounded by stunning Alpine scenery as you make your way through some of the most beautiful towns and villages of this breathtaking area. Although the focus is very much on the riding, we’ll make sure you get your daily caffeine fix and also have some time to explore places such as Bolzano, Cortina (host town of the next Winter Olympic Games), Corvara and lake Resia. Ride over exhilarating passes, climb by soaring spires, and coast downhill to charming hamlets surrounded by meadows of wildflowers on mountain routes made famous by the world’s greatest cyclists.

We’ll stay at authentic and comfortable hotels in the Dolomites. And because we won’t be changing hotels every day you’ll have plenty of time to enjoy the amenities: spas, saunas, pools, and massages.

Custom dates for groups of six or more.

It was another truly great tour – we loved it all! 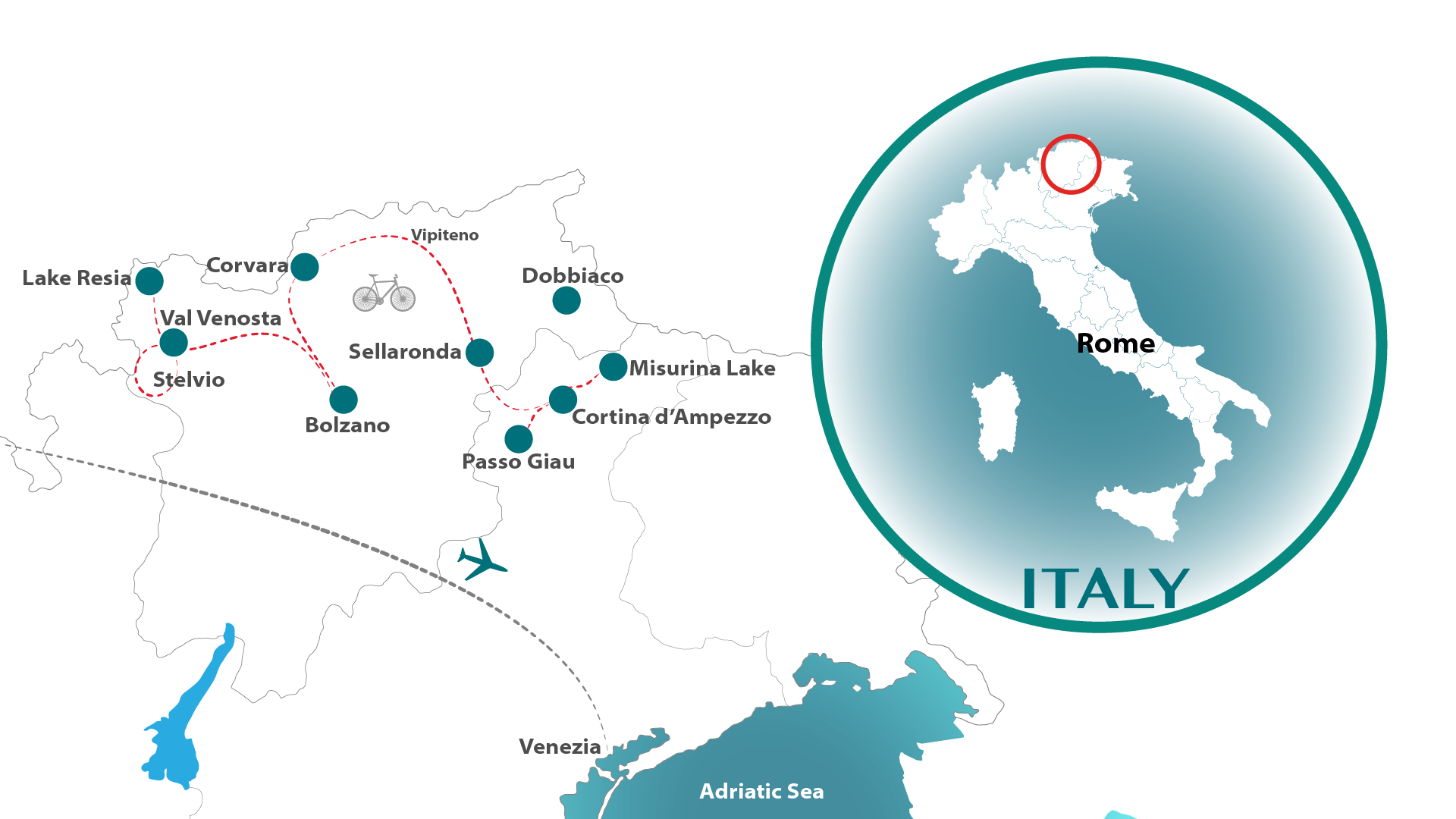 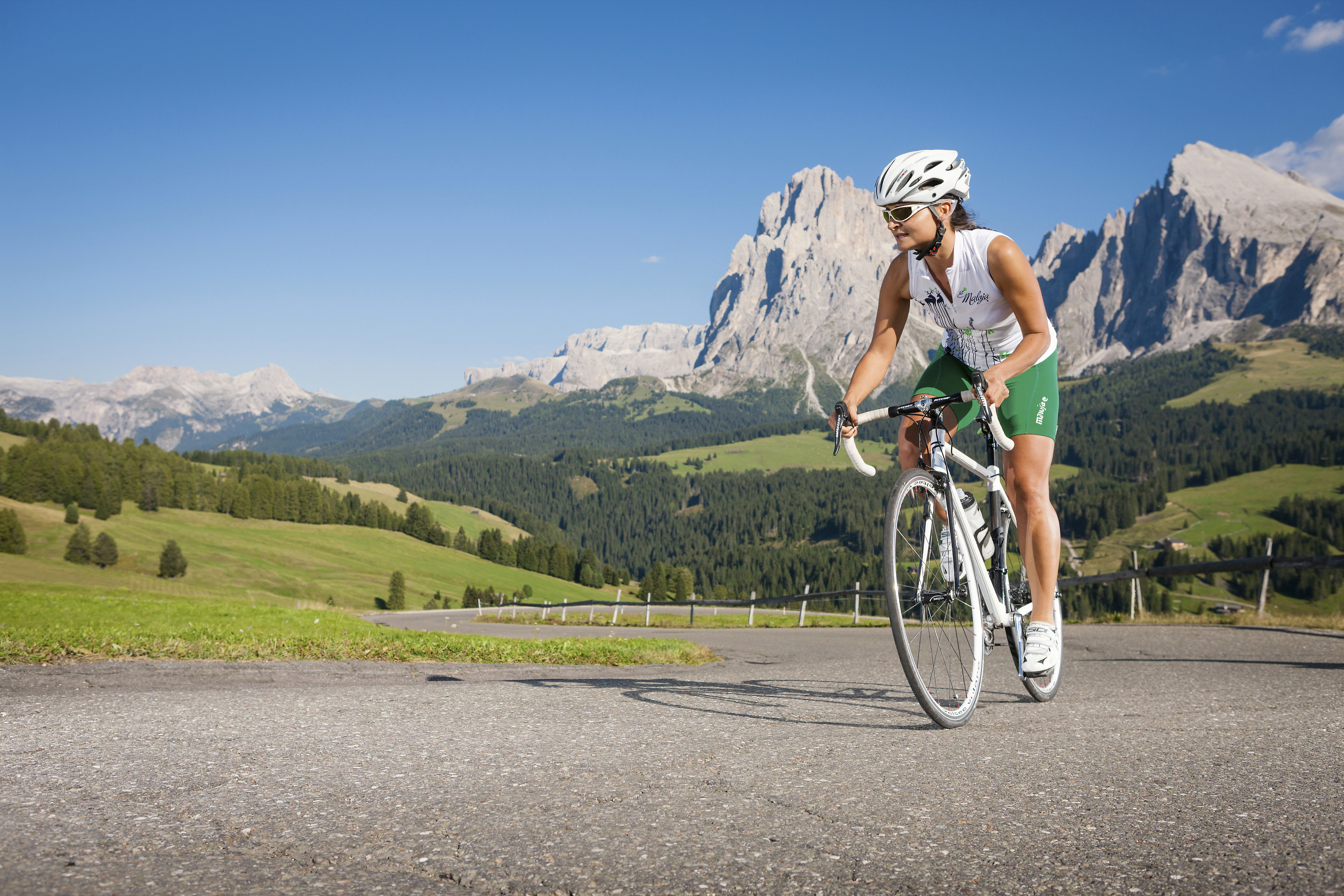 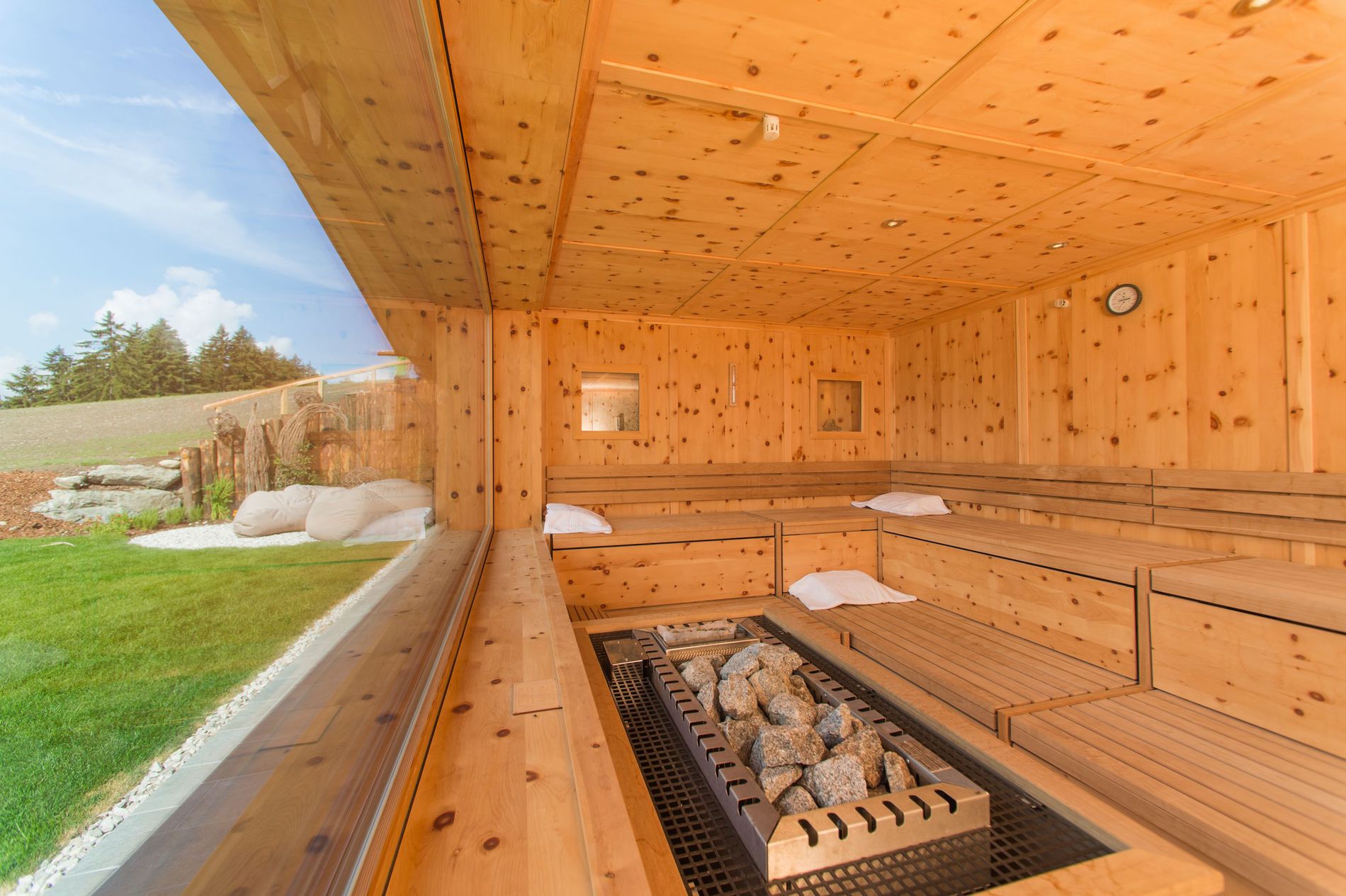 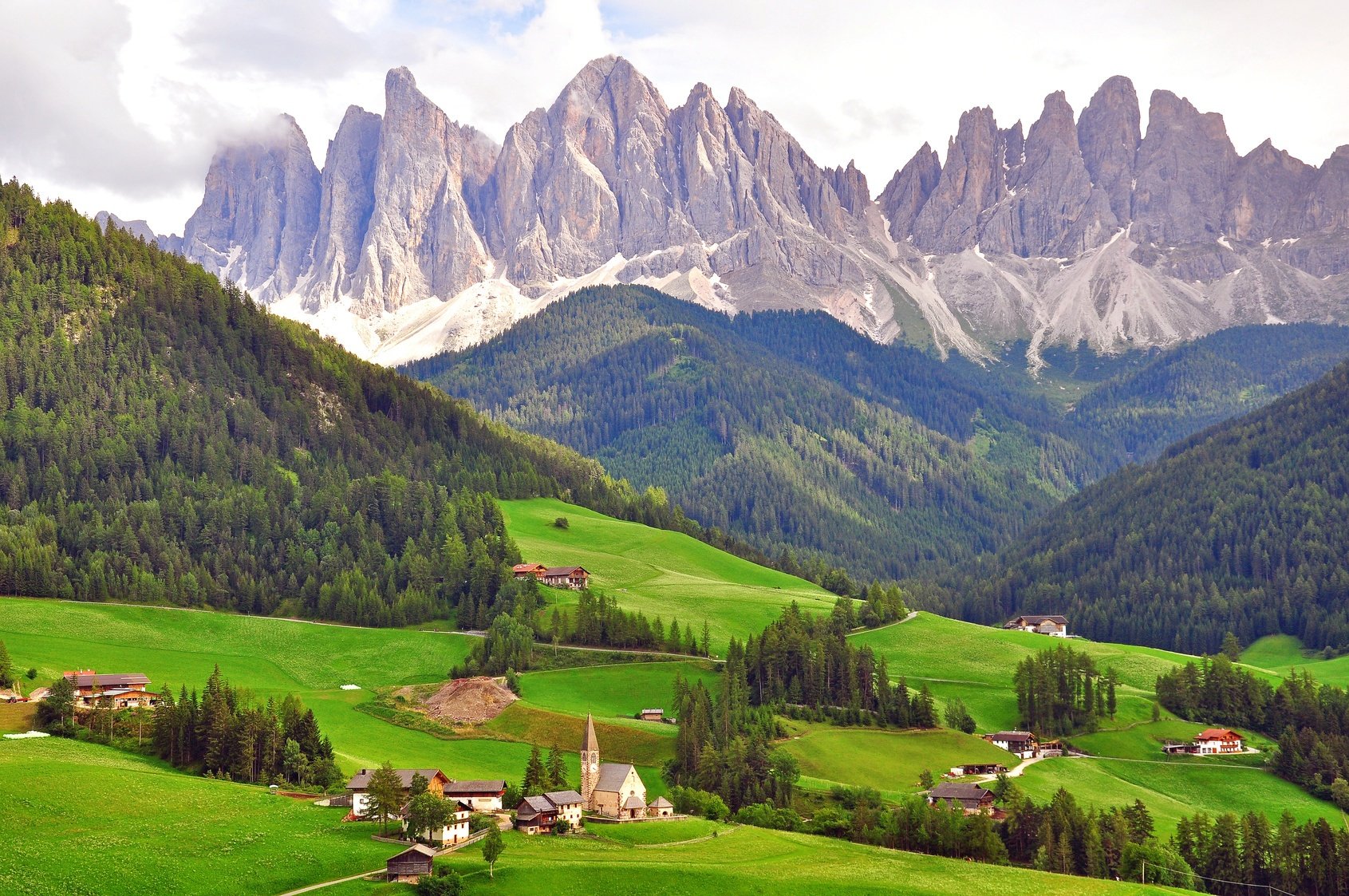 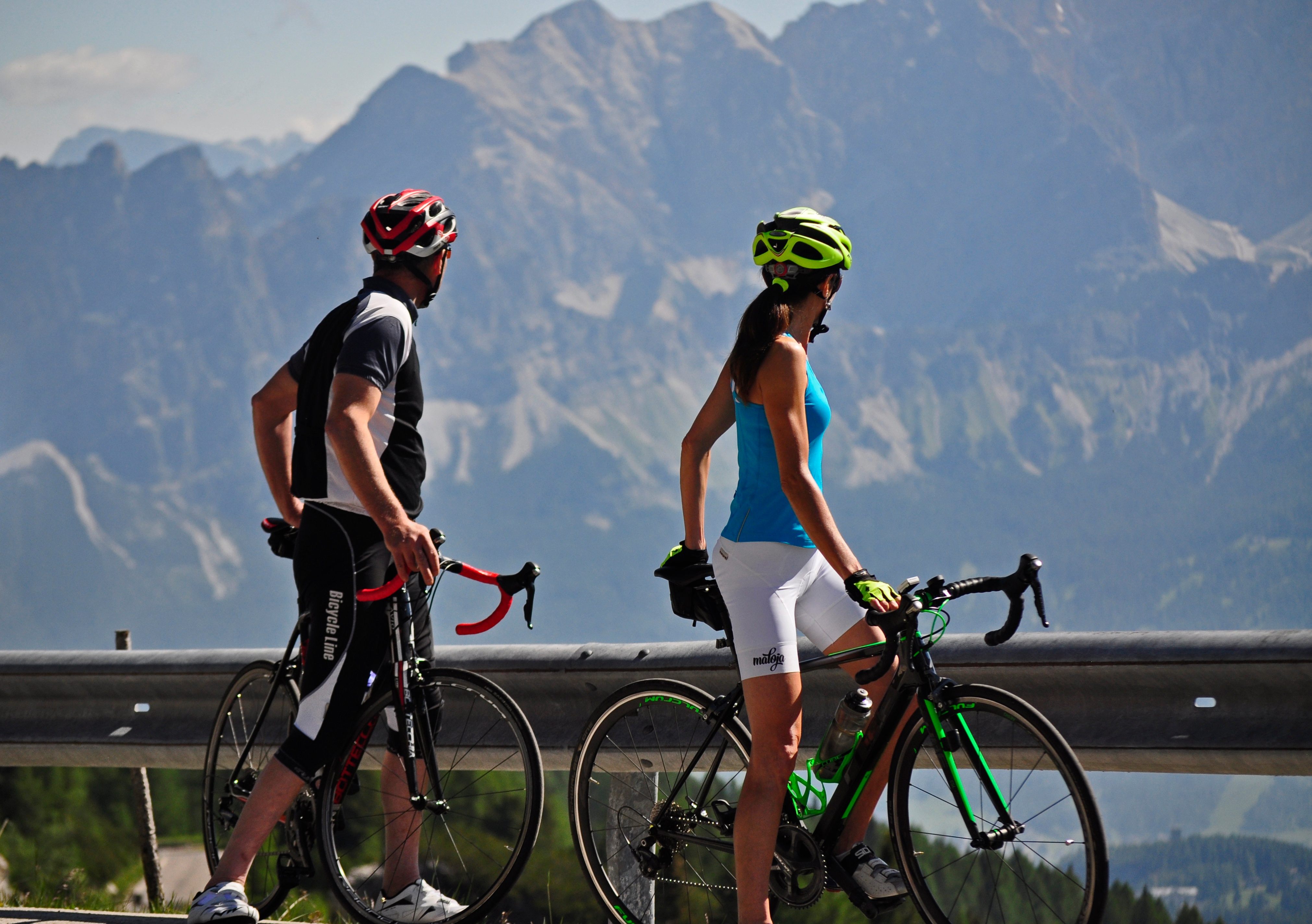 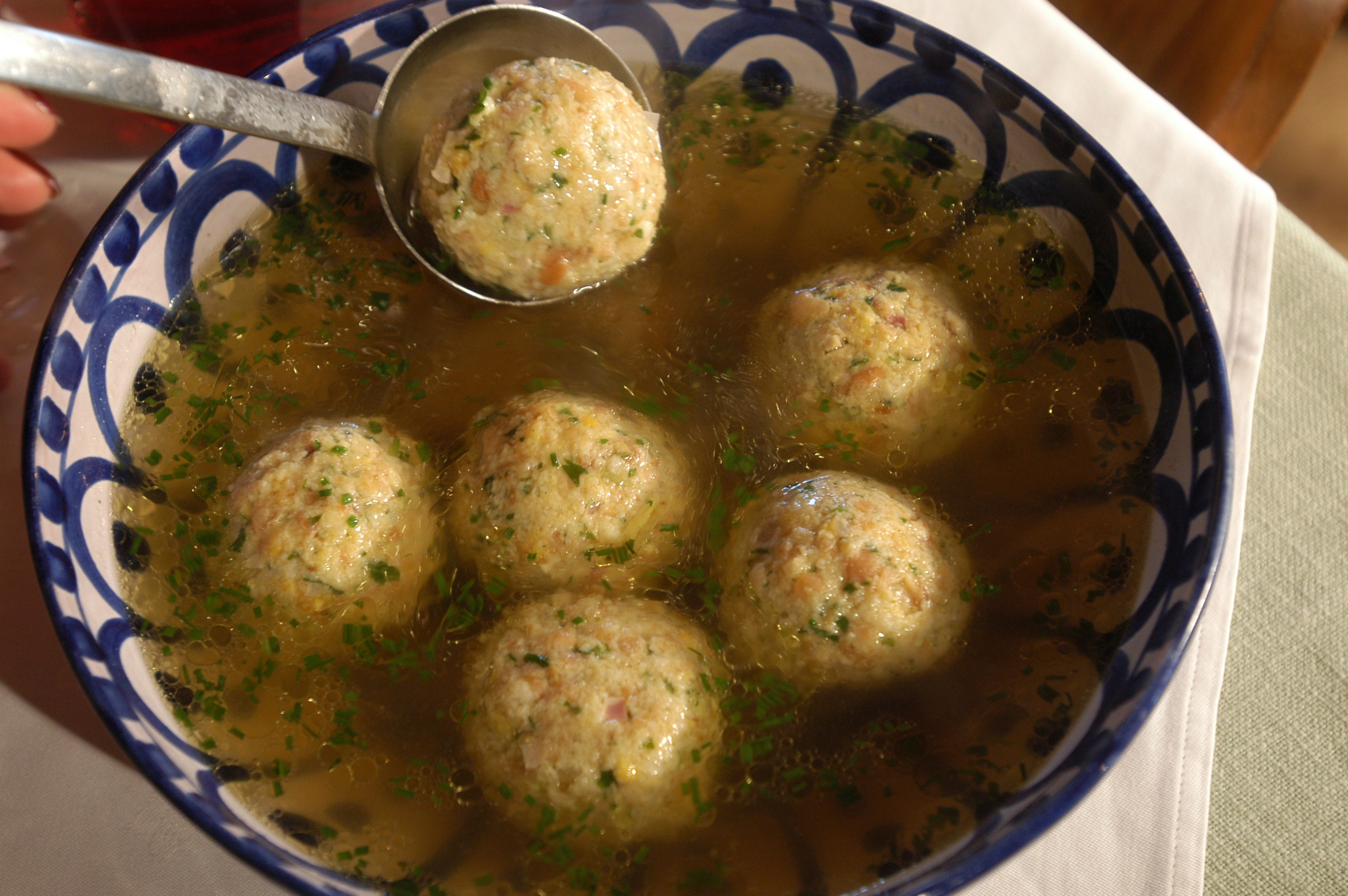 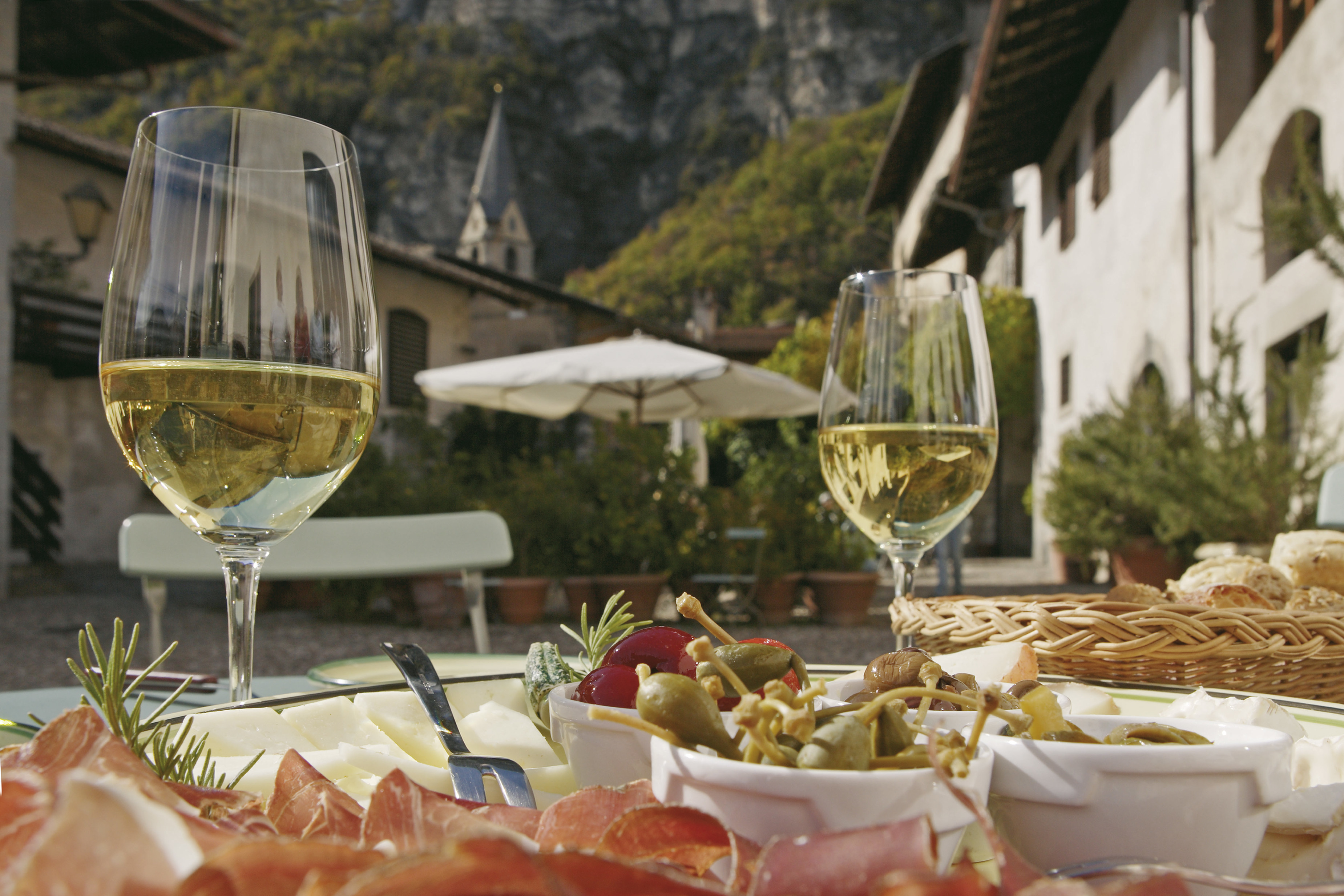 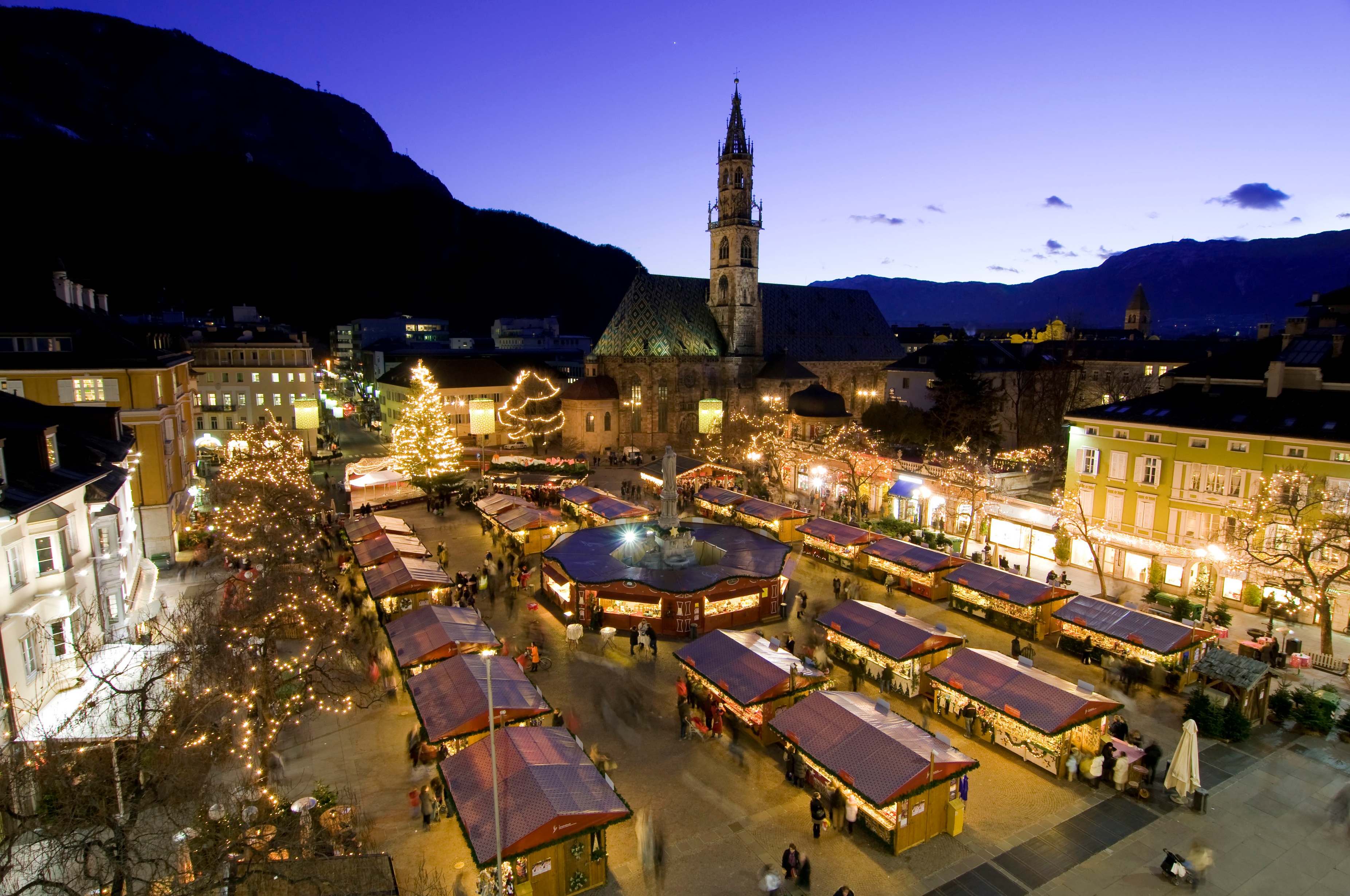 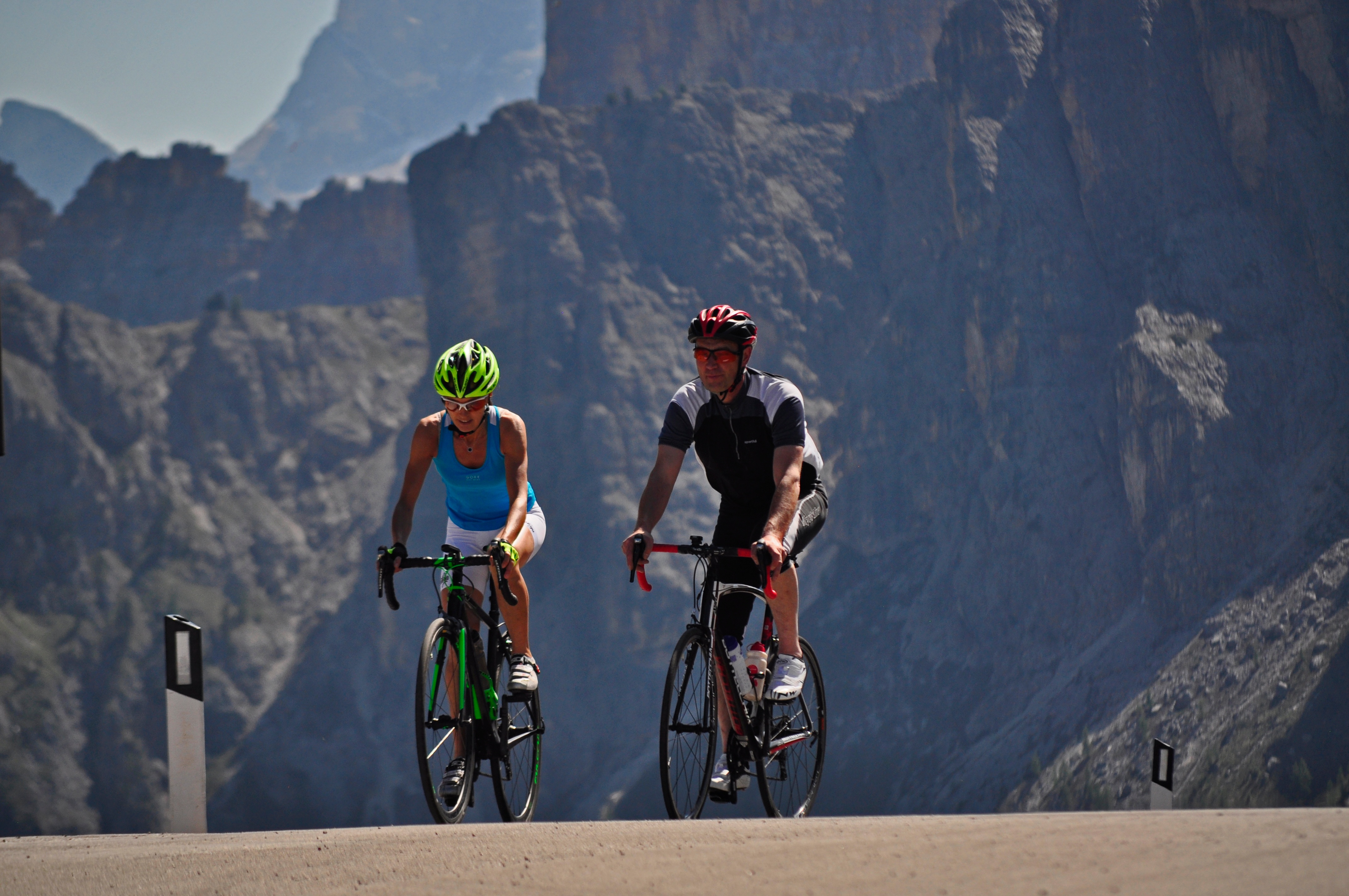 We’ll pick you up at the Venezia airport and transfer you to the first hotel. After a light lunch we’ll get fitted to our bikes and go on a leisurely test ride heading towards Dobbiaco and Austria along the SS 51 main road past a dense pine forest. After 300 mt (984 ft) of elevation gain, we conquer the easy Cimabanche Mountain Pass, followed by a gradual ascent to Misurina. Lake Misurina is an idyllic site with a great view of the Tre Cime, three peaks that are the symbol of Dolomites. Enjoyable descent back to Cortina. Our hotel is just a short walk from the lively and fashionable village center. Dinner is at the hotel.

Our warmup is a manageable ascent to the Falzarego and Valparola mountain passes. After an exhilarating descent to La Villa, we continue on to Corvara, followed by an uncomplicated climb to the Campolongo mountain pass. From here, descend to Arabba. Enjoy the view of the Marmolada; it’s the highest mountain of the Dolomites at 10,968 ft. During the Great War, Austro-Hungarian soldiers were quartered in deep tunnels bored into the northern face's glacier, and Italian soldiers were quartered on the south face's rocky precipices. As glaciers retreat, soldiers' remains and belongings are occasionally discovered. Near Colle Santa Lucia, we begin the challenging climb to the Giau Pass, the highlight of the day (2,233 m or 7,326 ft). The gradients do not go over 12.5%, and this tough climb is accompanied by the stunning scenery along the way. In addition, we partake in the international cycling presence at Passo Giau. A highly enjoyable descent to Cortina is next. Let’s have an aperitivo to celebrate this day!

Next is the Badia Valley, a popular ski resort and base for cyclists wishing to explore the Dolomites. In the Val Badia the main language is Ladin, which does not resemble German at all. Instead, it’s a language derived from Roman conquerors and from an indigenous mountain tribe. The Costa family at Hotel La Perla are proud representatives of the Ladin culture. This day is indescribable, and the remarkable landscape speaks for itself. This is the classic circuit around the heart of the Dolomites: it is definitely a “must ride" for those who love bikes and the mountains! Here you will discover the essence of mountain cycling like nowhere else in the world. Every year, millions of bikes come to follow the tracks. You will be contending with four passes that surround the majestic summits of the Sella Group and lead to four Ladin valleys: Passo Campolongo, Passo Pordoi, Passo Sella, and Passo Gardena.

This ride leads us to one of the prettiest areas of Sud Tyrol, the Sciliar high plain where the Austrian language and culture are still dominant among the locals. Road signs, language, food tradition are German here; once again we thank Italy for its diversity! After having climbed two passes, we reach Bolzano. This is where you want to take care of your shopping but be on time for a walking tour of this interesting city, which is always rated as one of the Italian cities with the highest quality of life.

Today we change locations by following the Adige River Valley upstream. We drive to Merano (Meran), where, after the customary morning cappuccino, we hop on the bikes in the direction of the Val Venosta riding on the Via Claudia Augusta bike path. The 50-mile bike path leads from Merano to Resia Pass along the old Roman road, Via Claudia Augusta, and is particularly popular among European cyclists.
Up to Malles, Val Venosta is a fertile area covered with vineyards and apple orchards. On the left side, we’ll soon spot the Marienberg Abbey, the highest Benedictine Abbey in Europe, that has been inhabited for more than 800 years. Deeper into the high Venosta Valley (Obervinschgau) is one of the most Instagrammed sites of the Dolomites: Lake Resia, an artificial lake where the town of Curon was submerged in 1950 when a dam was constructed. Today the only visible reminder of the town is its bell tower that rises from the water.

After a picnic lunch by the lakeshore, we ride down along the Via Claudia. It’s a beautiful, relaxing ride. Another highlight of the day is Glorenza (Glurns), a well-preserved medieval city. Our bike-friendly hotel features a pool and a gorgeous spa.

It’s the day many of us have been waiting for and perhaps feared. It’s time to climb the king, the Stelvio Pass. We’ll go up its "classic" side from Prato Stelvio. With over 14 miles and 48 you'll rise to 9,045 feet to conquer the highest paved road in the eastern Alps. It’s mighty and it’s long but it’s one of the most beautiful passes imaginable with endless views into the mountains toward Switzerland from the summit. Weather on the Stelvio Pass can be temperamental. That is why we designed our tour in order to have two days to attempt to make. This is accomplished by swapping day 5 and day 6. Your guides will give you an in-depth briefing this morning to describe the climb and the role of the Tourissimo van on the climb. On it’s a festival with riders from all over the world and the atmosphere is at once serene and full of adrenaline. After some we start descending and once back at the hotel we’ll all enjoy some recovery time in the pool and a hearty celebratory dinner. You made it!

[fa icon="plus"] Day 7
Venice
After breakfast, you will be transferred via shuttle to the Venice airport. Ask Tourissimo about extending your trip to Venice. 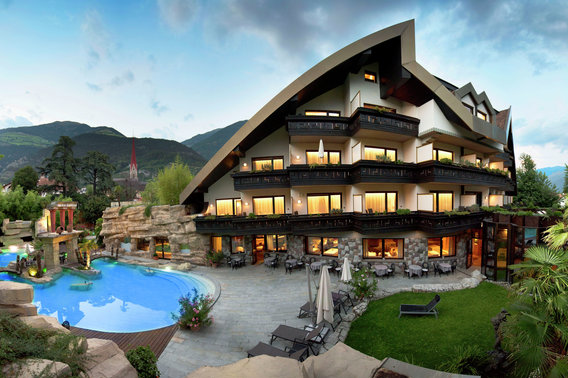 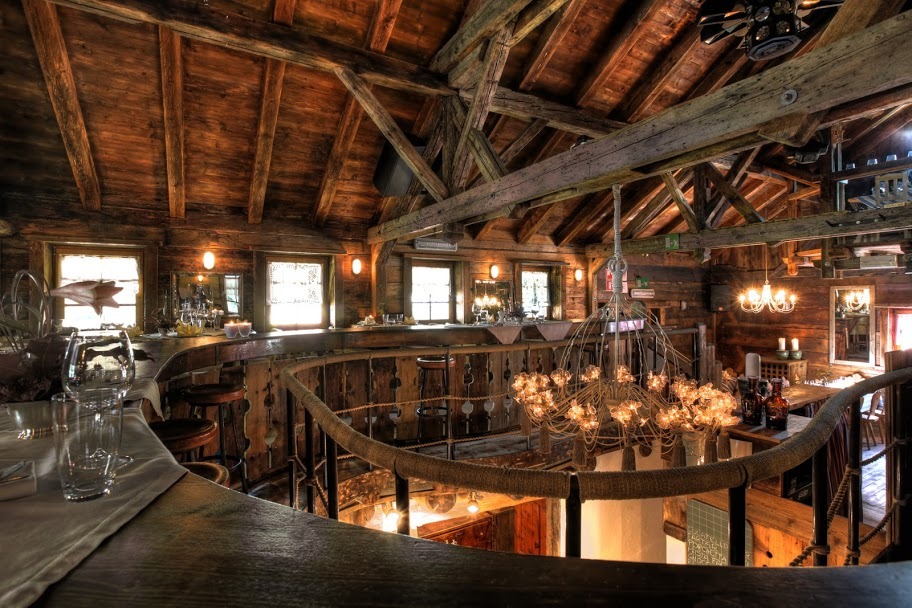 The Riding Terrain The Dolomitic riding terrain is one of our most demanding road cycling and the rides are exactly what you might expect from one of Europe’s major mountain ranges: mountain pass after mountain pass. The route includes numerous serious Giro d’Italia passes, and as such involve a lot of climbing. Two or more significant climbs a day is not uncommon and many will include steep sections. The Stelvio will be the highest pass and we climb it from the Prato allo Stelvio side (read our Stelvio blog here).  Road surfaces are generally good although mountain weather can take its toll. Caution should be exercised when descending as downhills are as frequent and long as the ascents and many feature numerous tight bends and switchbacks. Competent and confident descenders will undoubtedly enjoy the downhill stages whereas less confident riders will be expected to exercise caution. Traffic is generally light throughout however it can become busier on occasional sections especially when nice weather attracts motorcyclists.

The site of the Dolomites comprises a mountain range in the northern Italian Alps, numbering 18 peaks which rise to above 3,000 meters and cover 141,903 ha. It features some of the most beautiful mountain landscapes anywhere, with vertical walls, sheer cliffs and a high density of narrow, deep and long valleys. A serial property of nine areas that present a diversity of spectacular landscapes of international significance for geomorphology marked by steeples, pinnacles and rock walls, the site also contains glacial landforms and karst systems. It is characterized by dynamic processes with frequent landslides, floods and avalanches. The property also features one of the best examples of the preservation of Mesozoic carbonate platform systems, with fossil records.

Pordoi, Campolongo, Gardena, and Sella. The sequence of those passes comprises a loop called the Sellaronda (the loop of the Sella massif 3151 mt - 10335 ft). Cycling legends have been made on these passes for nearly a century. Mountain stages of the Giro d’Italia – the iconic three-week professional bike race - have seen legendary riders both rise and fall, as riders could gain the Pink Jersey (the leader jersey) and seal the final victory, or lose it all on a bad day. It all happens on the Dolomites year in and year out. Coppi, Bartali, Merckx, Gimondi, Hinault, then Pantani and a few others, all left their mark there. Sellaronda is in practical terms a loop that became a mountain cycling stadium in the middle of the Stunning UNESCO-recognized mountains. Nearly all sports have their sacred venues. Dolomites’ Sellaronda is that venue for mountain cycling.