Piedmont wine region: perfect riding where you least expect it.

Piedmont is a region in the northwest corner of Italy that borders France and Switzerland. Almost half of Piedmont can be described as mountainous while most of the remainder is considered hilly. Its terrain is higher and perhaps more challenging than the description "the foot of the mountains,” the literal translation of its name, might suggest.

The Langa and Monferrato regions of Piedmont are in one of the most important wine production areas in Italy and received UNESCO World Heritage status in 2014. The Piedmont Magnifica Mini tour will take us to the heart of these regions, over rolling hills covered with endless vineyards and past ancient castles and hidden hilltop hamlets. These hills offer superb riding along peaceful secondary roads.

Vineyards cover most of the hills here and wines such as Barolo, Barbaresco, Barbera and Nebbiolo are perfectly paired with dishes that will make each meal a gastronomic event. Towns like Barolo, Acqui Terme, and Alba are perfect stops for a taste of what the region has to offer, where strolling through the cobbled streets and sipping a glass of local wine in piazzas bursting with cafes and wine bars is a great way to end a day on the bike. You’ll see how connected the local people are to the land, and how they take pride in everything they produce.

The first two days revolve around Alba, our stay for two nights, which is the capital of the Langa region and a charming, midsize town. There, a local guide will explain its history and link to agriculture, the economic foundation of Langa along with wine and truffle tourism.

The second part of the itinerary will take us to Acqui Terme, a spa town since Roman times, and will then explore the area of Novi and Gavi, known for its white wine and also as the training ground of past cycling champions Coppi and Girardengo.

The riding itself is hilly and extremely scenic with beautiful ridges and rolling hills. Days are fairly short but the terrain will ask for several power bursts which are always rewarded by stunning views. On a clear day, snow-capped Mount Blanc and Mount Rose appear closer than they really are and are easy to spot. On the western side, one can easily recognize the triangular shape of Mount Viso where the Po River rises (the main river in Italy running all the way to the Adriatic Coast south of Venice).

E-bikes are available and they will make the hills seem like an afterthought. 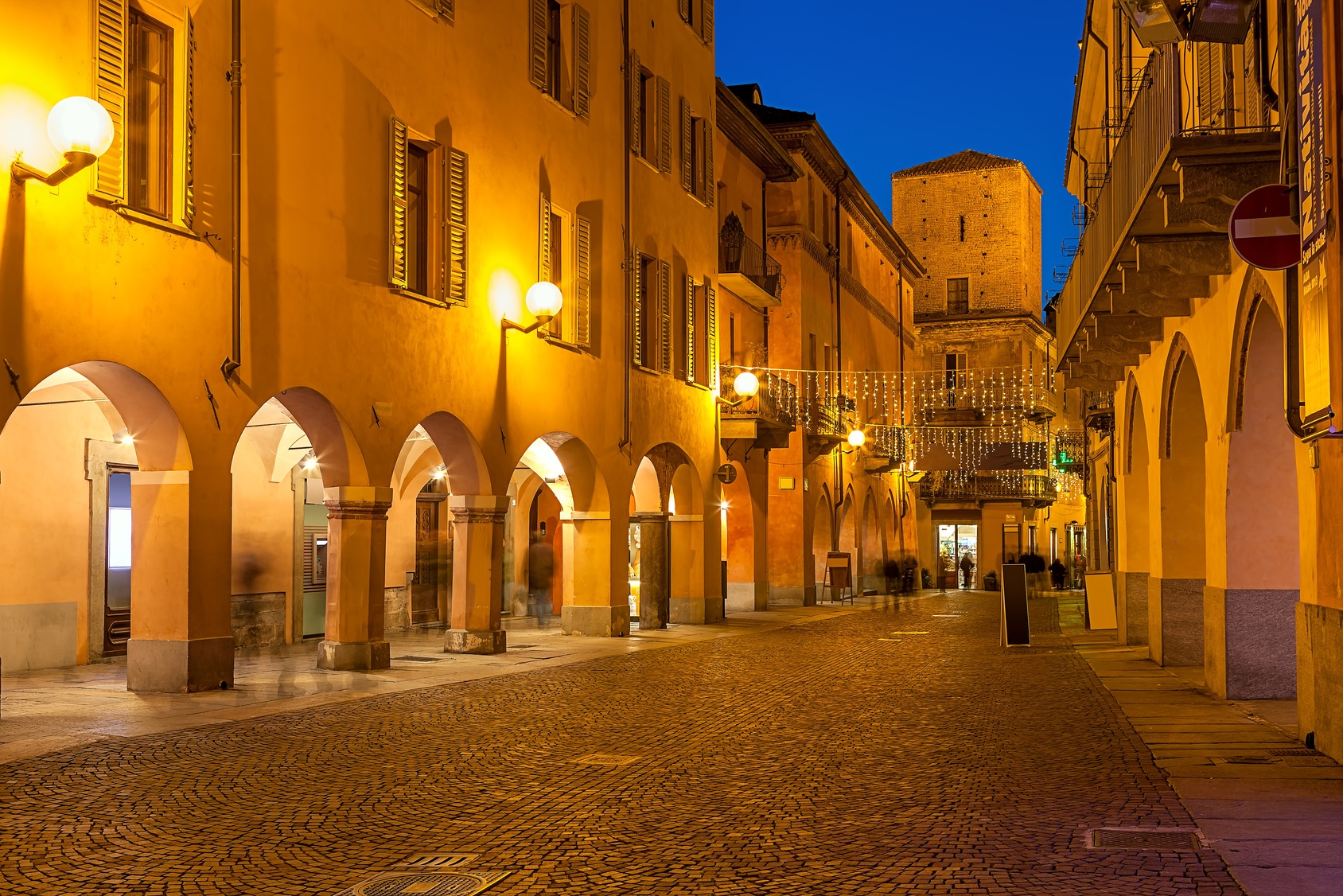 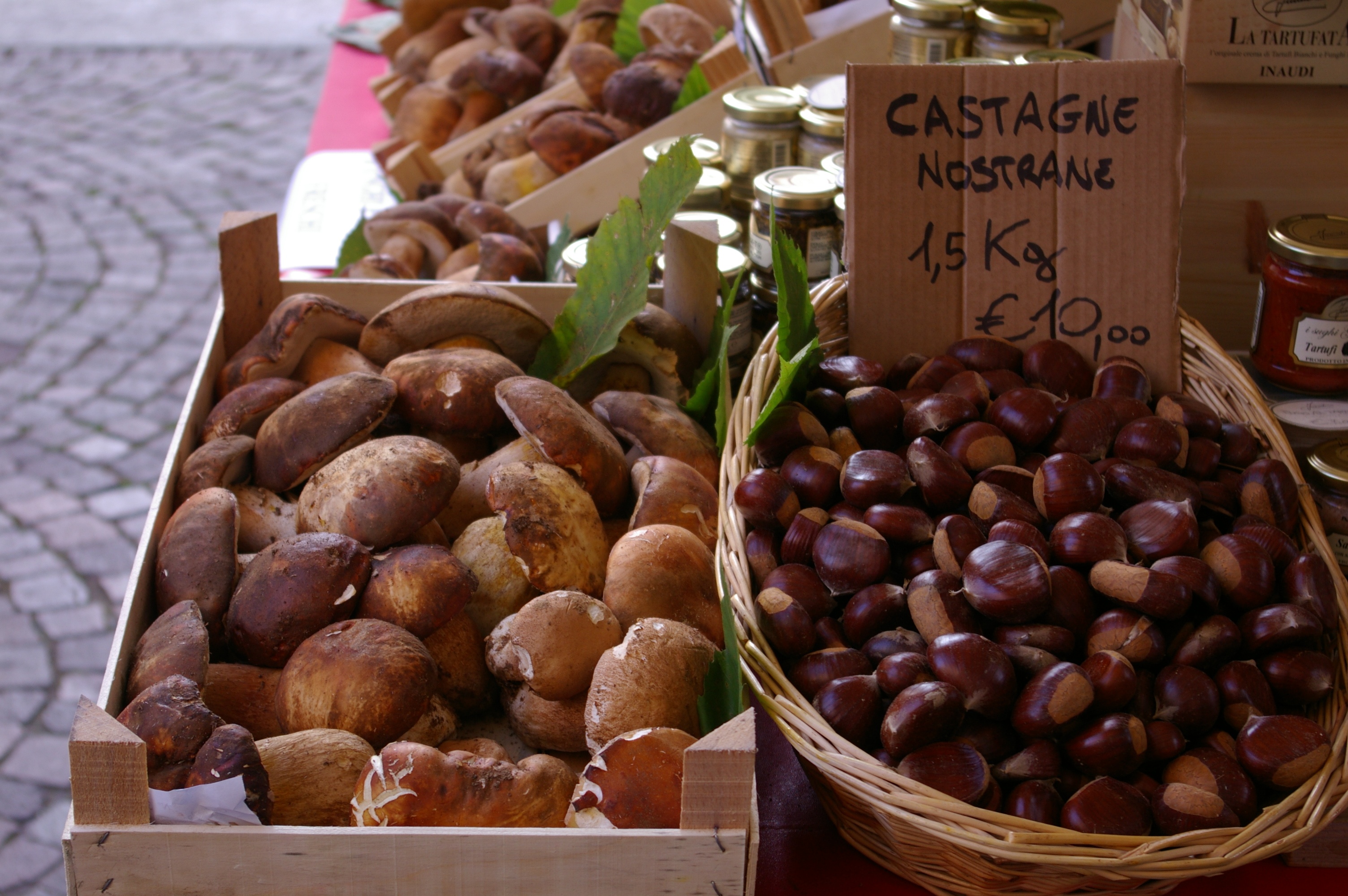 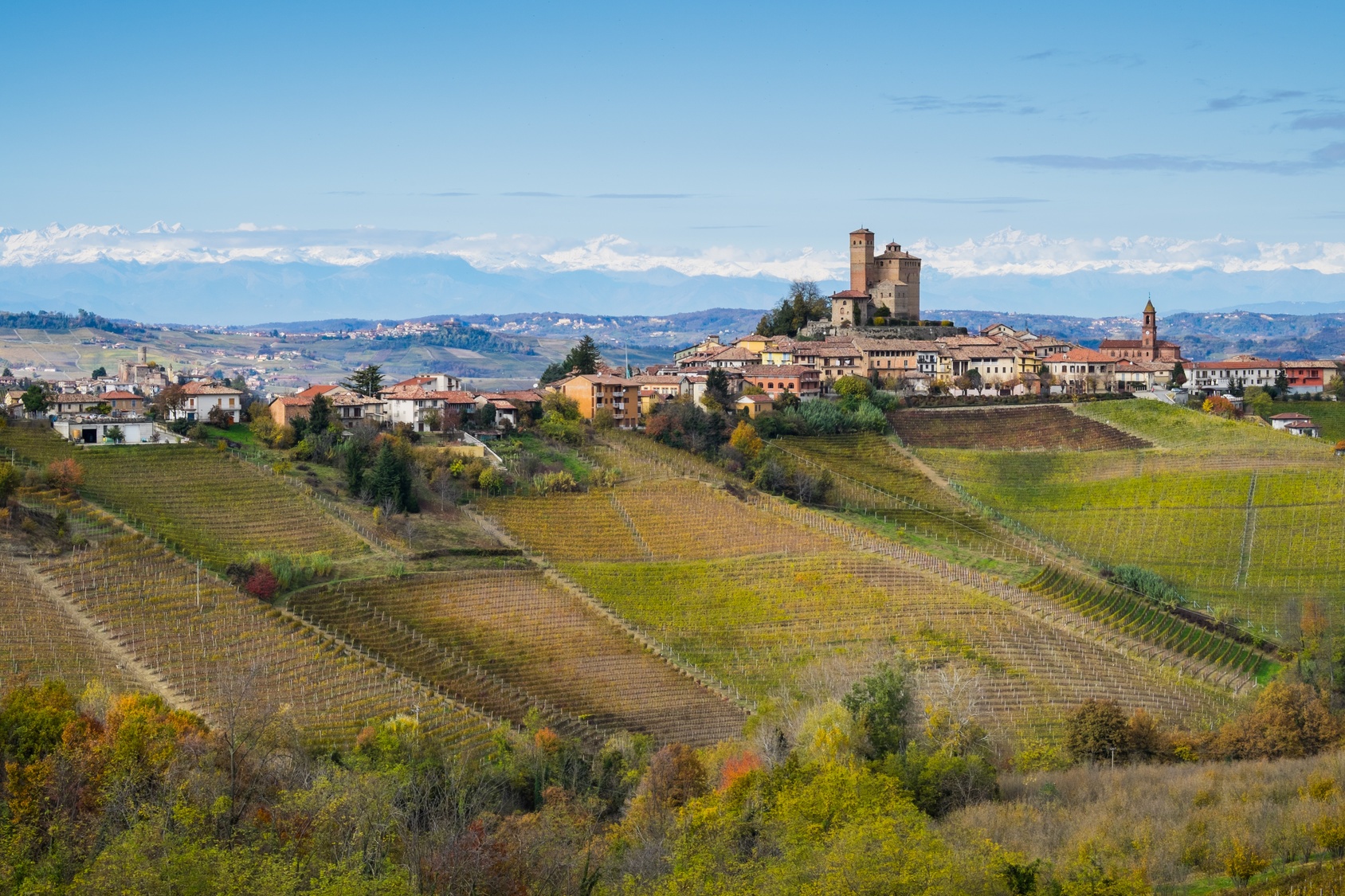 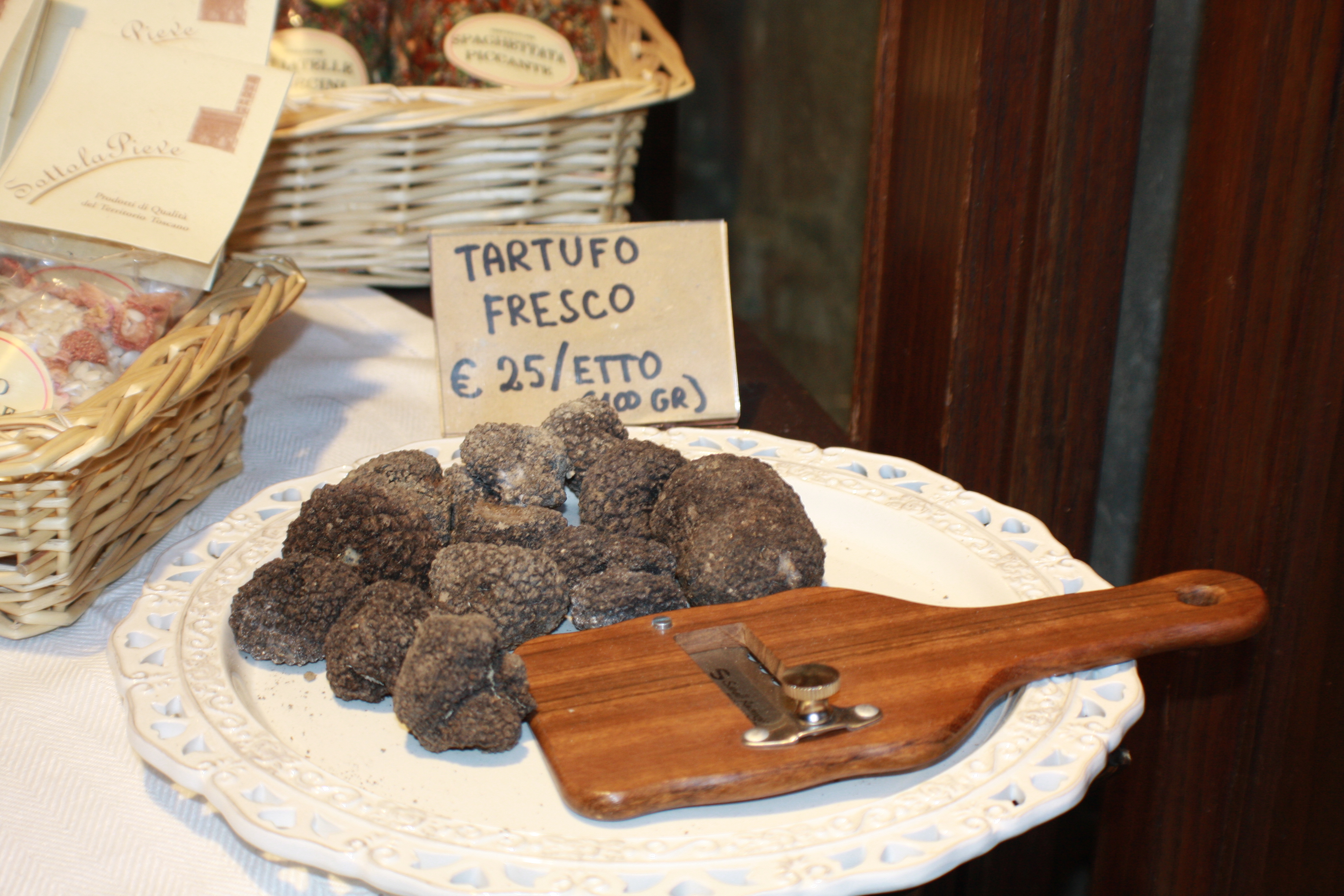 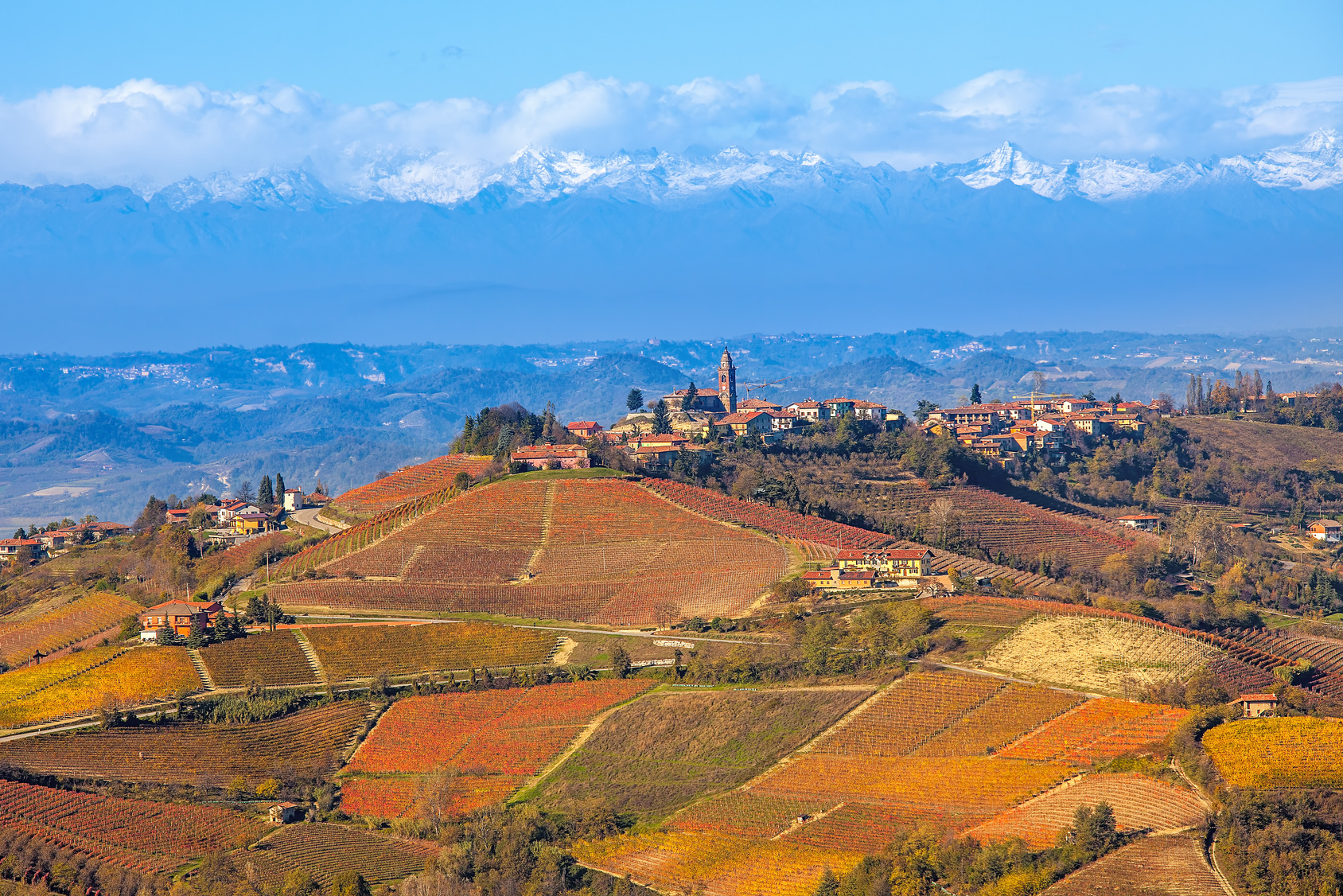 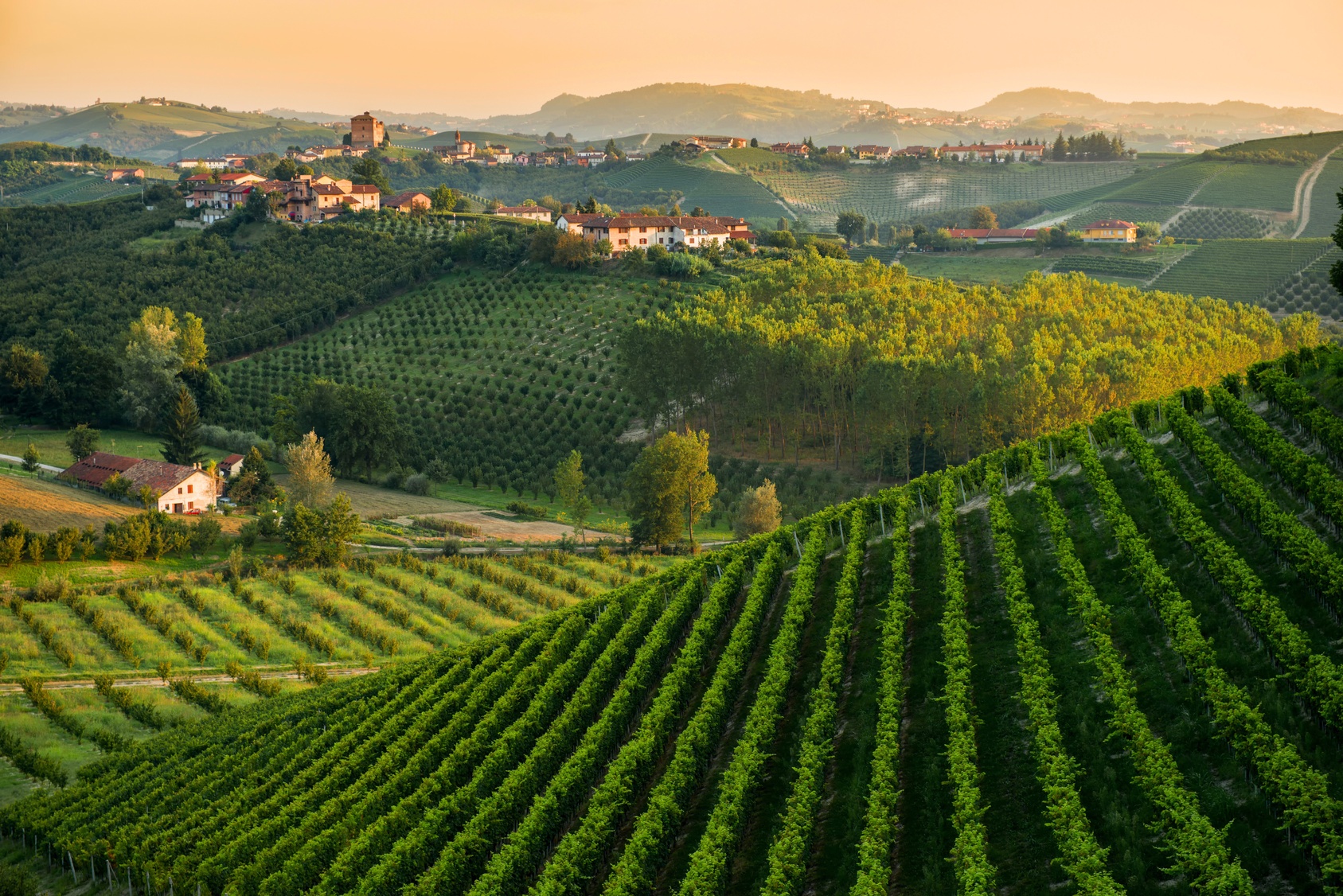 After a transfer from Turin (about 1 hr), we’ll make it to Alba and ride from there. The area southwest of Alba is part of the Barbaresco wine production zone. The three villages where Nebbiolo grapes for Barbaresco wine can be grown are Neive, Treiso, and Barbaresco.

The original, small, and elegant villages of Barbaresco and Neive will be part of our ride today. As you approach Barbaresco, its imposing 12th-century tower stands out in the landscape. Almost square-shaped, its height originally reached 118 ft (36 meters), making it a strategic position overlooking the Tanaro Valley below. The tower is what is left of an imposing fortification that once crowned the hilltop where Barbaresco rises. Down a winding ridge, we’ll head towards Treiso before an exhilarating descent back to Alba. Enjoy some free time before dinner.

We spend two nights in Alba, the elegant capital of the white truffle, also nicknamed the town of a hundred towers. Only a few of these fine red-brick towers have survived, but they still give the town its distinctive appearance. Of Celtic and Ligurian origin, called Alba Pompeia by the Romans, the town has kept a spiral-shaped medieval plan. A tour program description will precede our first group dinner.

Today’s ride starts out with an ascent to La Morra. La Morra is considered the balcony of the Langa region because of its wonderful views of the entire area. In Barolo, we’ll visit the Enoteca Regionale di Barolo (regional cellar of Barolo), where you will have an instructive explanation of the King of Wine’s production and differences. Between La Morra, Barolo, and Monforte, you’ll ride past rows of nebbiolo vines cultivated by such legendary producers as Renato Ratti, Bartolo Mascarello and Roberto Voerzio.

We will then ride on a beautiful ridge that borders the Alta Langa and continues with some ups and downs all the way to Serralunga d’Alba, and then Grinzane Cavour. The 13th-century Grinzane Cavour castle, once home to the famous strategist Cavour and now a Regional Wine Cellar, also hosts a literary prize and a world-famous white truffle auction. If we are lucky, majestic view of the Alps will accompany us for the majority of today’s ride. This evening, we will partake in an Italian tradition: l’aperitivo. Dinner is at one of the best restaurants in town. Tomorrow we say farewell to Langa and ride to Monferrato.

Today we pedal from Alba to Acqui Terme, passing the castles of Monferrato, a hilly area where each village is protected by a castle. As we gain elevation, the vegetation changes as hazelnut-topped woodland covers the round and gentle hills. We cross the Alta Langa, the highest and wilder portion of this territory.

The vineyards of dolcetto, cortese and moscato are the landmarks of the second part of the ride as we descend into the Bormida River Valley. Monferrato is not as well-known as Langa and wine tourism does not bring very many people there. That said, we consider it a hidden gem for cycle tourism.

We stop along the way for a nice picnic of focaccia and local specialties, such as robiola di roccaverano cheese.

Founded by Greek colonists, Acqui Terme has been well-known for its hot springs since Roman times. Our guests can take advantage of a complimentary entrance to the spa with natural thermal waters. Enjoy!

Today we have a well-deserved late morning start. We leave town and we’ll soon spot the still-standing structure of a Roman aqueduct on our right. We cross Cassine, one of the best-kept medieval villages of the area, where we can stop for coffee. We’ll then discover the hills of the wine region of Nizza, famous for a red barbera grape (Nizza DOGC). The highlight of the day is a visit to a local winery. We taste wines along with lunch with the owner and oenologist, Daniele, and his family. The area features hills covered with vineyards and spectacular views of tiny villages and country churches. Back in Acqui, you’ll have some free time for the spa and to do some shopping. We gather again for dinner at our favorite pizzeria.

A fairytale ending is planned at a boutique hotel in the outskirts of Gavi that sits among cortese vineyards and that is part of an award-winning wine estate. To make it there we ride along the Bormida River Valley, and after crossing a ridge capped by the village of Cremolino with its nicely preserved 13th-century castle we meet the Orba River Valley. At over 1,400 ft (426 meters) above sea level, Cremolino’s castle is the highest in the Alto Monferrato. From here, 14 of the 28 nearby castles can be seen; in fact, this is one of the areas with the highest density of castles per square kilometer in Europe. The best part? Hardly anyone – including most Italians – has ever heard of it. Gavi is an unpretentious village in the Lemme River Valley. The first thing you notice is the impressive medieval fortress that was meant to control the way from the Ligurian Sea towards Piedmont and the north. It served its purpose as a defensive fortress until the mid 800’s when it became a prison.

Aperitivo with a view of the sunset and a gourmet dinner are our farewell to Piedmont.

Transfer to the Turin airport after breakfast.

It is possible to extend your stay in Turin or at Ostelliere, Villa Sparina.

• All accommodations in 4-star hotels 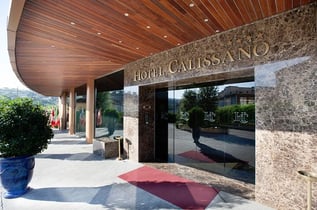 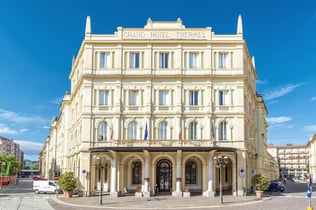 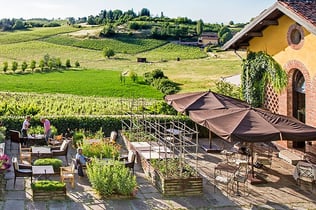 It's often pointed that Tuscan cooking has its roots in "cucina povera" - peasant cooking. In truth, though, that can be said of most Italian cuisines. It's true, though, that Tuscan cooking is a simple one. There are no reductions, no fancy sauces, no elaborate creations, no heavy complicated seasoning. Throughout Tuscany, olive groves and wild herbs are everywhere. Many of the best olive oils produced in Tuscany are reserved for use as a condiment at the table, rather than as an ingredient in cooking in the kitchen. Some of the best Italian reds are produced in Tuscany: Chianti, Brunello, Nobile di Montepulciano, not to mention the super-tuscans.