There’s nothing more exciting than cycling in Sicily! The largest island in the Mediterranean is arguably the most beautiful and certainly the most dense with history and humanity. Sicily's complex culture is matched only by its stunning natural beauty and the incredible, diverse landscape: rolling hills and valleys swathed in grapevines, miles of aquamarine coastline and a series of archipelagos that can be reached via a quick boat ride. We will pedal back in time to a colorful and enigmatic past that has never left the island. With Tourissimo, you will see the real Sicily.

This seductive Mediterranean island has lured conquerors and visitors for centuries. Phoenicians, Greeks, Romans, Arabs, and Normans have all contributed to the many layers of its vibrant culture. We’ll steep ourselves in the sights, scents and flavors of the western part of Sicily, an area less exploited by tourism. We’ll swim in the pristine waters surrounding the Egadi islands, sample the finest wines of the island at a local producer, and learn about the Greek heritage of Selinunte, a stunning waterfront village that is a UNESCO Archeological Site.

In past decades Sicily received attention for its organized crime, and the Mafia became a literary and Hollywood phenomenon. Unfortunately, that is all that some people know Sicily for. True to the Tourissimo Experience brand promise, we will show you a different story. Without hiding the evidence of this scare, we will learn the historical roots of it through the people who, with courage and pride, are winning the battle against organized crime.

Join us to experience everything Sicily has to offer.

One of your guides will meet you at Palermo Airport for a late morning shuttle to your hotel in the city center where everyone will gather for an introduction over a glass of wine. In the afternoon, we will go for a short ride to test our bikes and to tune into vacation mode. Palermo is the cultural center of Sicily and is known for its architecture, which has just been listed as a UNESCO World Heritage site. You will get to appreciate this during a walking tour that will lead to our first dinner at one of the best restaurants in town.

Today we start our bike journey, leaving Palermo and traveling into an unexpected, rural Sicily. Orange, olive and almond trees are abundant in the fertile valleys as we transfer to Monreale. In Monreale we visit the Cathedral, also recognized by UNESCO, and considered the best expression of Norman architecture in Sicily. Monreale is situated on the slopes of Monte Caputo and the ride will afford breathtaking views of the valleys below as we descend. In the town of Piana degli Albanesi we’ll stop to taste the best cannoli in Sicily! Rolling, secondary roads take us to our accommodation near Corleone in the middle of the Sicilian countryside, an area characterized by cultivated fields and Mediterranean scrub. If you’ve read The Godfather by Mario Puzo or seen the blockbuster film of the same name by Francis Ford Coppola, you’ve heard of Corleone. The young Vito Corleone flees to the New World to become the respected man of honor that the Italian immigrants called Padrino (Godfather). After the movie, Sicily became synonymous with the Mafia and omerta, the code of silence. Nowadays, we are seeing the rebirth of those places where the mob used to rule, thanks to the government and NGOs, and to the new generations believing in a legal alternative (such as tourism). In any case, a coffee at The Godfather bar is a possible stop.

Today’s panoramic morning ride involves a gradual descent and a short climb on the crest of the Sicani Mountain Regional Park, and will take us to Lake Arancio, a slice of paradise between Sambuca di Sicilia and Menfi. After crossing several sleepy villages, we will reach our lunch destination, the beautiful Ulmo Wine Estate owned by the Planeta family (among the most prominent wine producers in all of Sicily). The winery lies on the banks of the Lake Arancio in especially beautiful countryside and just a few meters from the 15th century farmhouse which has belonged to the family since then. We will take a tour of the winery and taste the local production, from international grapes such as chardonnay and syrah, to indigenous grapes such as grecanico and nero d’avola. Our hotel is just outside of Menfi. Planeta’s Foresteria is a romantic mix of rural luxury and Sicilian hospitality. Relax by the swimming pool and enjoy the view before a cooking class with a local chef. After the class you will own Planeta’s family recipes, from Sicilian-style pasta with sardines to caponata, from the superb timbale in Ricotta cheese crust to scabbardfish with herbs.

Today’s loop ride takes us inland to the ghost town of Poggioreale. This town (and others) was almost destroyed and then abandoned in 1968 due to a violent earthquake. The ruins show a somehow sinister, yet fascinating pre-1968 Sicilian Village. The lush, fertile Belice River Valley is home to shepherds who proudly carry on their cheesemaking traditions, unwilling to settle for the comfort and opportunities of the coastal towns. What better way to enjoy the day than a picnic with fresh vegetables, crispy bread, and cheese sampling? The way back to Melfi is a rolling ride with very little traffic and some gorgeous photo opportunities. Back at La Foresteria, you can opt to take advantage of the spa facility or relax poolside. We will transfer along the coast to Porto Palo for a seafood dinner.

Following the Ciclovia of the Southern Coast we’ll arrive in Selinunte, one of the most impressive archeological sites of ancient Greece. In the 6th century it was a city with 100,000 inhabitants, and was one of the most powerful in the world. Today it impresses visitors with its striking waterfront setting. Leaving Selinunte we’ll pedal along golden, sandy beaches to reach Mazara del Vallo. It is not a touristy town, but a busy workaday port with the largest fishing fleet in Italy. We’ll have lunch here which will feature the best of the daily catch. There’s a strong north African influence in this town which can be seen in the labyrinth of streets called the Casbah. Continuing along the Southwest coast of Sicily we reach Marsala. Marsala is located at the westernmost part of Sicily and it is in the Italian history books for the docking of Garibaldi on May 11th 1860. Nowadays, Marsala is best known for its sweet dessert wines. From Marsala we’ll sail to butterfly-shaped Favignana Island, the largest of the Egadi islands. The eastern half of the island is almost completely flat and very easy to explore by bicycle. Around the coast tufa quarries are carved out of the crystal-clear waters. We spend the night in a fascinating hotel in a tufa quarry.

We’ll visit the Florio Museum, a former tuna processing plant, to learn about the history of tuna fishing on the island, including the “mattanza,” the traditional ritual of trapping and killing tuna. After taking in the sights during a stress-free (and nearly car-free!) spin around the island, we’ll arrive at the port and board a boat for a private tour. We’ll stop at protected coves to swim in clear, blue water and enjoy lunch on the boat. The rest of the day is open to enjoy the relaxed pace of island life, taking a stroll through the piazzas and small streets or maybe relaxing on the beach!

After a relaxing morning in Favignana, we’ll board a ferry heading to Trapani, an important port and fishing town of Arab origin. The province of Trapani is known for its coral, tuna fishing tradition, and wine. We will ride South through the peaceful landscape of saline,which are artificial ponds where salt, a very precious product traded in the Mediterranean since the Bronze Age, is still collected. Salt was a highly valued trade item to the point of being considered a form of currency. Dotted along the salt pans are tiny windmills that were used to grind salt. From there we’ll ride into a nature reserve and every turn in this network of secondary roads affords stunning views of the Egadi Islands to the west and Erice to the North. We spend the night in a Relais in the middle of saline, yet another spectacular setting hand-picked by Tourissimo tour designers.

Where: Nubia
Terrain: Departure
Ride: None
Meals: B

After breakfast we’ll provide a transfer to the Palermo airport, about 1 hour.

How to Get There

Other transportation -  Private transfer by Tourissimo from the airport to the first Hotel. Upon request, guests can be picked-up elsewhere (additional cost).

Other transportation - Private transfer by Tourissimo from last hotel to the airport.

Recreational/Active/Athletic - Active: 30 to 55 mi a day along flat and rolling terrain.

This program usually runs from Saturday to Saturday

Info about food and wine, and Slow Food products 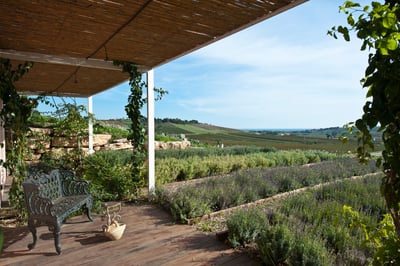 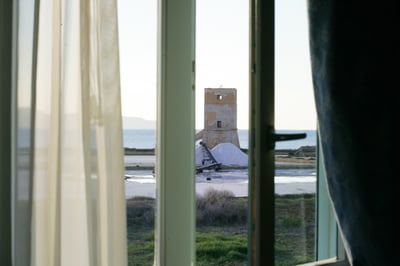