Scenic riding starting from the Adriatic, among vineyards, mountains, and lakes

There’s a lot of history involved in this cycling tour, with a focus on the years during and between the two World Wars and cold war. The itinerary also echoes the Mitteleuropean past of the area (on both sides of the border), when it was under the Austro-Hungarian Empire ruled by the Habsburg family, a real crossroads between cultures.

Both Friuli Venezia Giulia (aka Friuli) and Slovenia are big wine producers, especially of white wines, and it’s interesting to taste the same grape varietal cultivated in different soils and climates. Friuli’s wine regions of Collio and Colli Orientali del Friuli will be the backdrop of our cycling ride towards Slovenia. In September you can witness the peak of the grape harvest and the beginning of the winemaking process. Rolling vineyards, lush, green forests and snow-capped mountains form the backdrop for much of our riding along smooth, uncrowded roads and bike paths.

The views are just as spectacular when we are off the bikes enjoying a variety of landscapes. This program has a spectacular ending on Lake Bled and in the charming capital city. Ljubljana is one of the prettiest capitals in Europe.

Not sure if you can do it? Contact us to schedule a call about how demanding the rides are. E-bikes available.

The Friuli and Slovenia tour was a delight. We recommend this trip to cyclers of all ages.

Ellen Siegler and Devereaux Barnes Friuli and Slovenia Plus tour 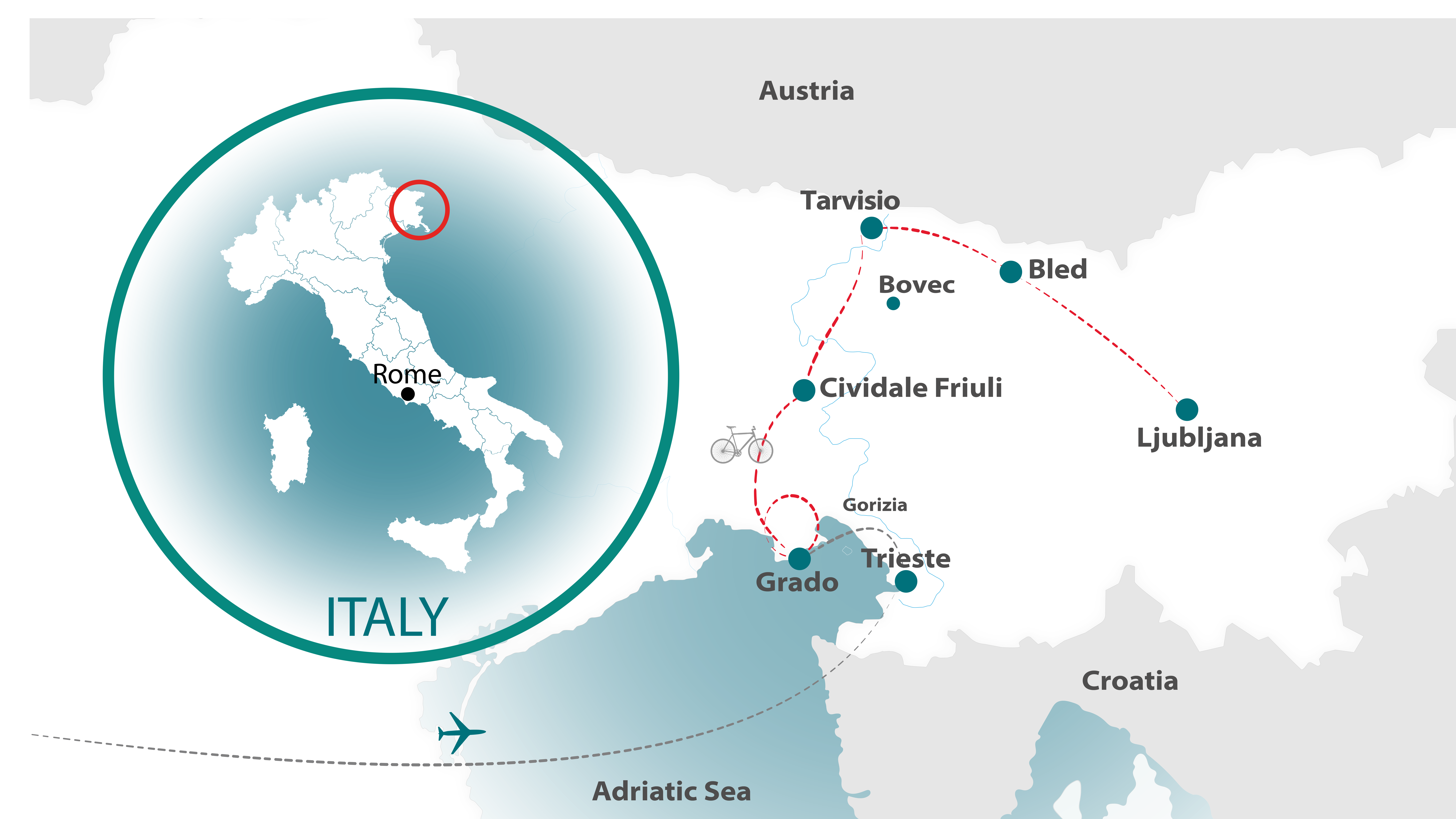 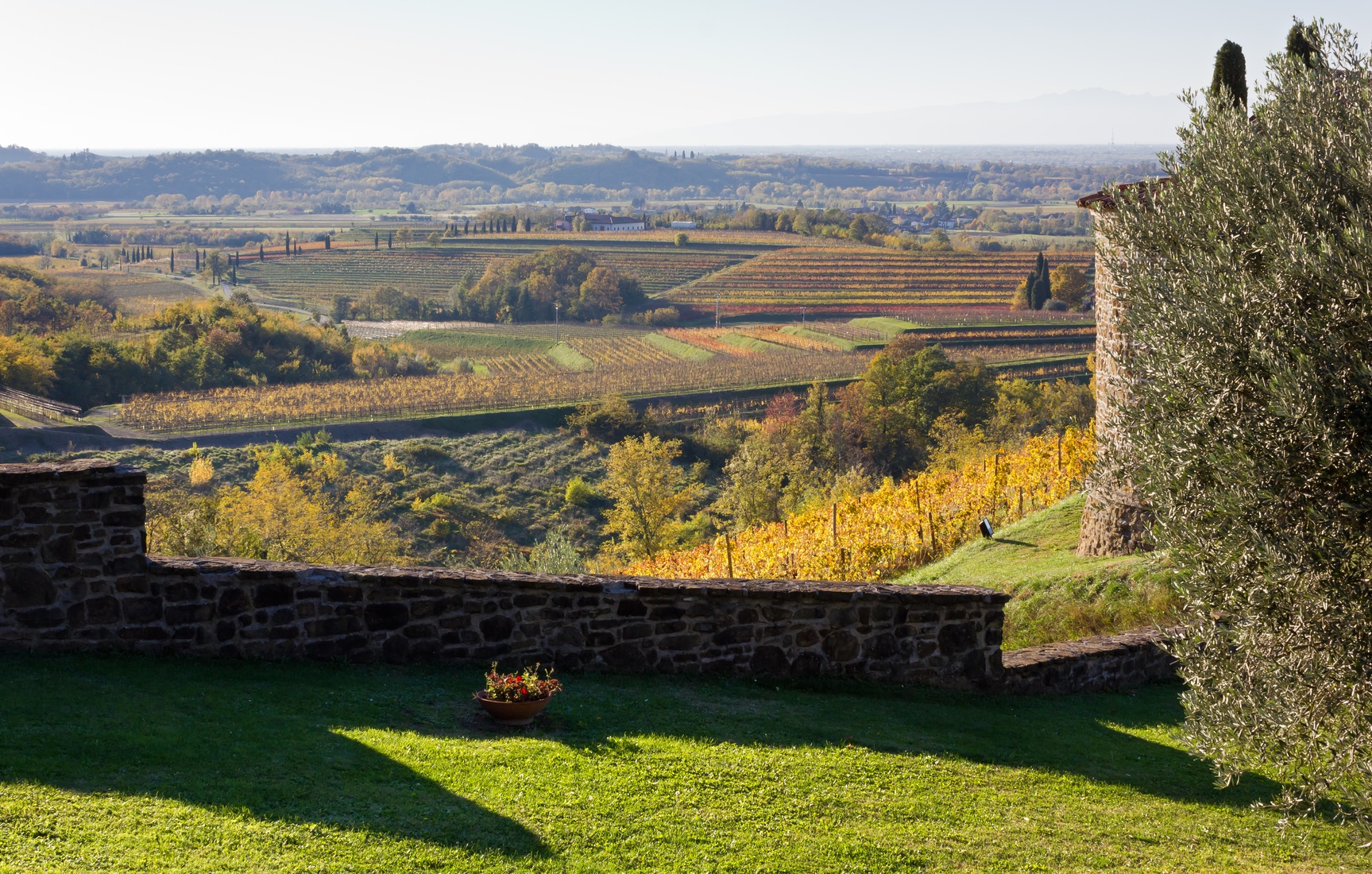 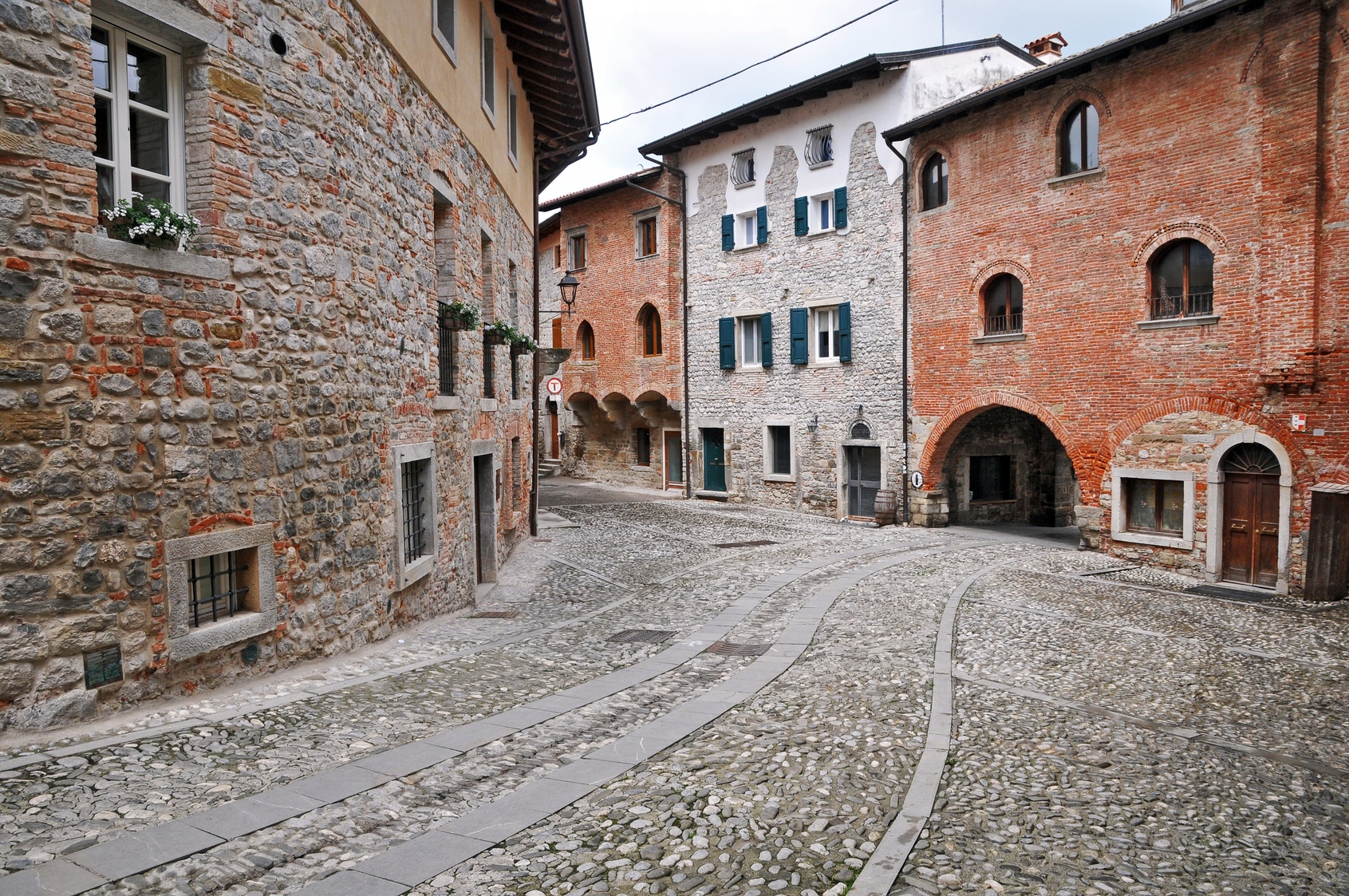 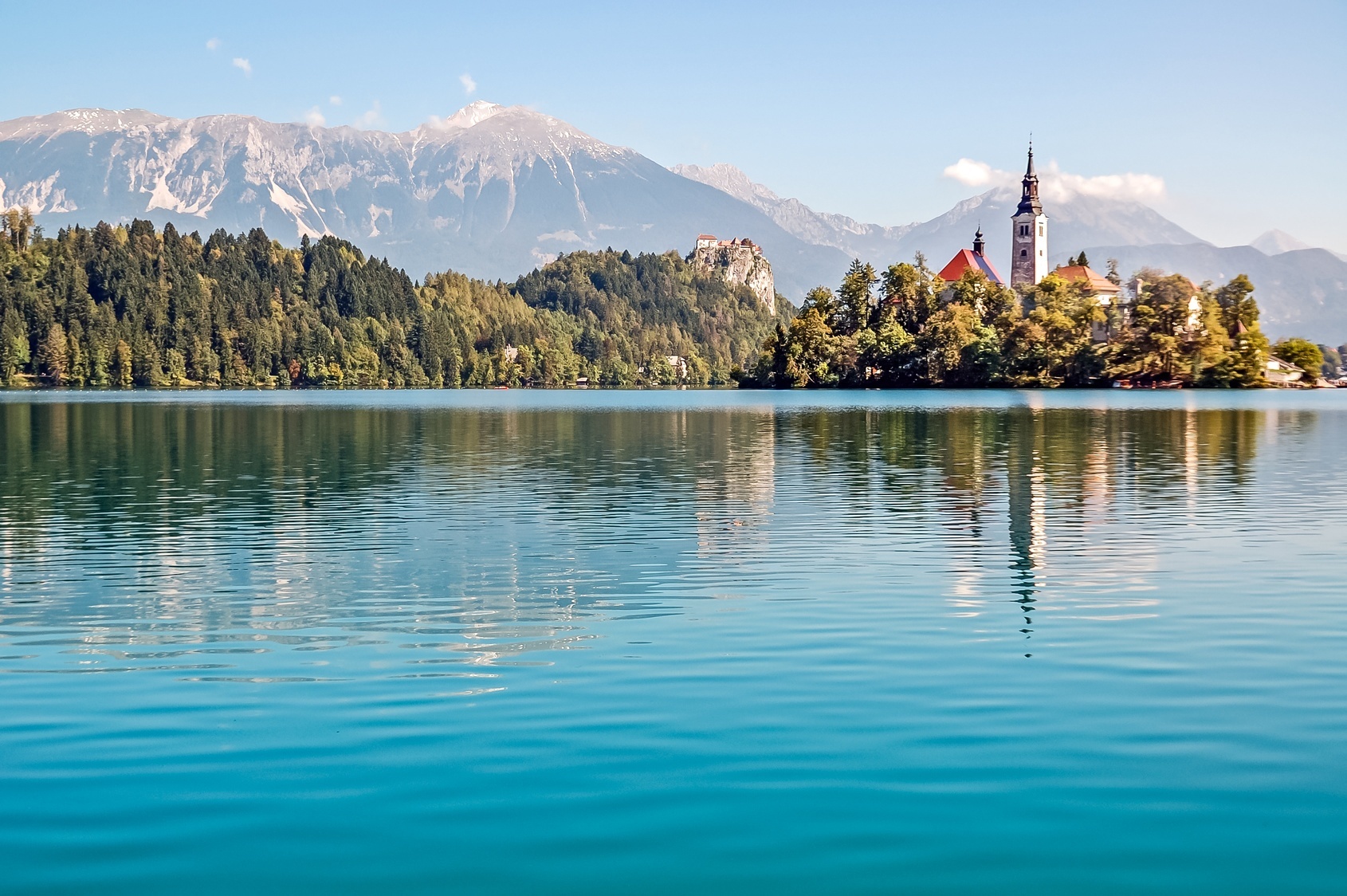 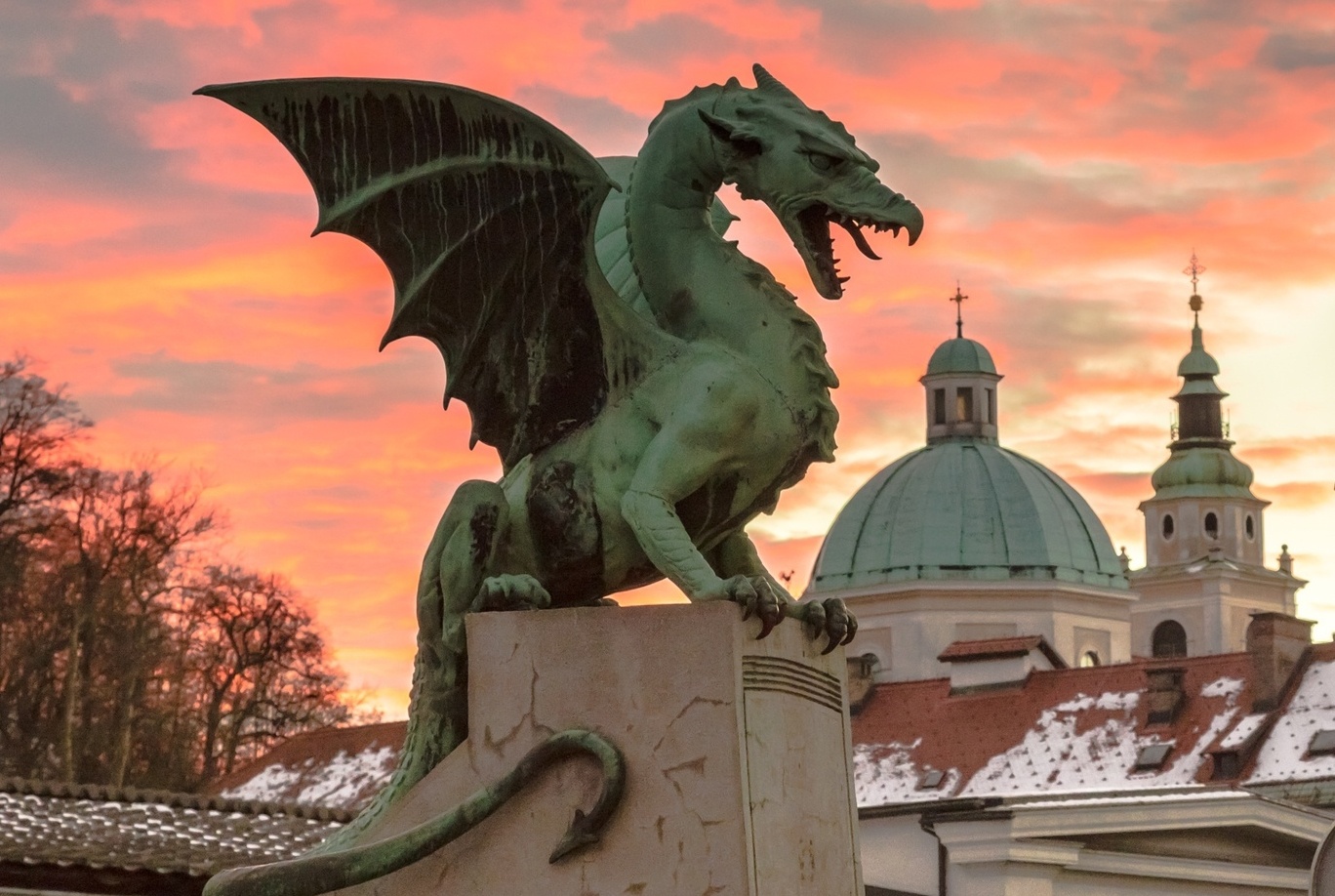 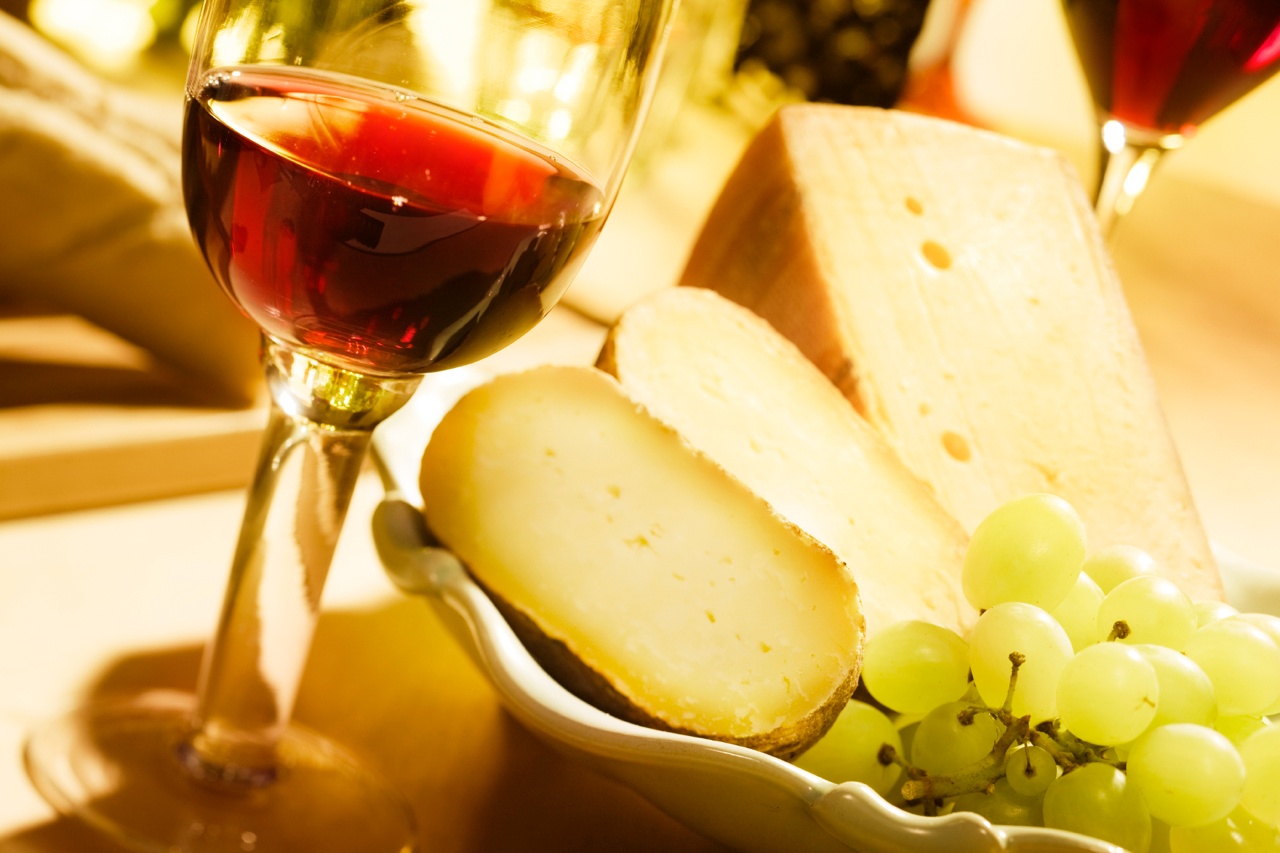 A private shuttle will take you to our hotel on an island-village on the Adriatic. Grado is Friuli’s lagoon city, a town with 1600 years of history, which can still be experienced by strolling the calli (streets) of the ancient city center. Grado was the first port of entry for ships headed upstream to nearby Aquileia, a powerful Roman city on the Natisone River. After some lunch and bike fitting, we ride inland to Aquileia. The colony was founded in 180BC and served as a strategic frontier fortress at the northeast corner of Transpadane (on the far side of the Po River) Italy.

Back at the hotel, you will receive an overview of the tour program followed by dinner at a seafood restaurant in the old city center.

After fine tuning our bikes some more, we ride along the Alpe Adria bikeway. Our first stop is in Palmanova - famous for its star-shaped fortification. Time for a cappuccino in the main square right in the center of the star. We continue along the Alpe Adria bikeway until we cross the Torre river and the terrain becomes more undulating. We reach a castle-winery for a taste of the local cuisine of this wine production area.

Our hotel is housed in a castle just a few minutes away from the center of town ny foot. Cividale, the capital of the first Lombard duchy in Italy, has been present on the UNESCO World Heritage Site list since 2011.

Today we rejoin the famous (and much-appreciated among cyclists) Alpe-Adria Bikeway. We go from Cividale to Tarvisio along the foothills of the Alpi Giulie, following the Tagliamento River Valley. Our first stop is planned in Venzone, a tiny but interesting village. Its strategic position along several trading routes made it the perfect spot for the old Customs location, which gave it a great deal of importance. The old town was completely destroyed by an earthquake in 1976 and rebuilt as it was in the Middle Ages, stone by stone. Declared a National Monument, Venzone is one of the most extraordinary examples of architectural and artistic restoration in all of Italy (and possibly all of Europe).

During the winter, Tarvisio is a bustling ski resort and in the summer it can be even more enjoyable as the Julian Alps express most of their beauty during this time. Immense forests and pristine lakes and rivers suround this remote corner of Italy. Tarvisio, is a border town where Italy, Austria, and Slovenia meet; the local cuisine reflects just that. Remnants of WWI still remain.

A few miles down the valley from Tarvisio, we have a possible detour to Fusine Lake (Italy). Upon entering a scenic bike path we cross the country line: we are in Slovenia! We stop in Kranjska Gora and then enter a secondary valley, now riding on a quiet country road. This valley, the Radovna Valley, is possibly the most beautiful, magical and enchanting place of the whole tour. Streams, small waterfalls, tall trees, water mills, a few old farmhouses and some cows are what we will see during the almost 6 miles of riding in this heavenly valley.

After lunch at a farmhouse we reach the shores of Lake Bled. This is one of the most picturesque sites in Slovenia. It’s time for a toast while admiring the beauty of this place. Our hotel is just a few miles ahead in a pine forest.

Our last ride loosely follows the Sava River Valley with the goal of making it to lively Ljubljana by lunchtime. We’ll have a coffee stop in the morning and a nice photo op at the Medno covered bridge. Ljubljana is certainly one of the highlights of the tour and you’ll understand why once you arrive. The city center offers many lunch options.

After checking in and changing, we will have a guided visit of the town center of this UNESCO recognized gem. You will have some free time in the afternoon to explore on your own and to do some shopping. We will enjoy our final dinner at one of the finest restaurants in town.

Transfer to Airport according to your travel plans. You can also extend your stay in the Slovenian capital. On weekends, Ljubljana has several concerts, open markets, and exhibits going on and you can take advantage of that.

• Snacks and drinks for each day’s ride 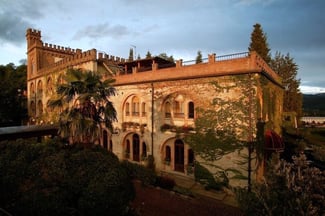 We've put a strong emphasis on the food and wine of Friuli and Slovenia in our tour.

The cuisine of Friuli reflects the varied cultures that surround this region and the focus is on simple, homemade products.  Pasta, an Italian staple, is eaten in many different forms: lasagna noodles are topped with poppy seeds and gnocchi can be mixed with goulash or smoked ricotta.  Polenta is served with meat, game or cheese.  A wide variety of soups (an influence from Central Europe) are consumed with different types of dumplings.  Friuli is known for its Prosciutto di San Daniele DOP, a cured ham with a sweet, aromatic flavor that is served with bread, melon or figs, and is paired with local white wine.  Speaking of wine, the Collio region is a land of big white wines like Pinot, Tocai Friulano, Sauvignon and Collio Bianco. A smaller production of red wines includes Cabernet, Merlot  Collio Rosso.

The Slow Food  in Friuli Venezia Giulia are strictly linked to the traditional Friulian lifestyle of farming and cooperation. Among the Slow Food recognized products we have Garlic from Resia, Radìc di mont, Formadi , Pan di , Pestàt from Fagagna, Cheese from the rotational dairies.

The pan di  ( means maize flour in Friulian), is a sweet and spicy bread, rich in transalpine influences. The locally grown cereals, called , grow and ripe in a period of 50 days at the most, even then managing to do a complete cycle also in the chill and rainy Gemona area.

The pestàt from Fagagna is a very peculiar seasoning created to preserve the scents and flavors of autumn vegetables and herbs in pork lard. Its production, on a family level, occurs during the slaughter of pigs, from November to March. The lard, coming from local pigs bred in a semi-wild manner with natural feeding, is minced and mixed with chopped vegetables and spices, put into natural casings and matured in damp and cool cellars.

Producing cheese from the rotational dairies was an economical and easy way of managing the milk, suitable for the small-scale dairy production of Friuli's territory, with many farmers in every village. The milk of many families was put together and processed together. The cheese produced, simply called ",” is aged for up to one year.

Just as in Friuli, Slovenia’s cuisine is influenced by the countries that surround it: sausage, Weiner Schnitzel strudel from Austria, pasta, gnocchi, pizza and risotto from Italy, and goulash from Hungary. The focus is on home cooked food that is simple and hearty.

The vineyards of the Italian Collio continue into the Slovene Brda, where the rolling hills create several different microclimates.  Unlike many of the major wine regions of Europe, Slovenia's winemaking history predates the  and can be traced back to the early Celtic and Illyrian tribes who began cultivating vines for wine production sometime between the 5th and 4th centuries BC.  Under Communist rule winemaking traditions were lost, but recently a generation of post-Soviet era vintners are rediscovering them, and since Slovenia’s 2004 entrance into the European Union, their wines are being more widely distributed.  Some popular varietals are  Refosk [Refosco], Sauvignon Blanc, Ribolla Gialla, Pinot Gris, Malvasia and an indigenous grape called Pinel.