A Timeless Journey through Ancient Sicily and the Aeolean Islands

The largest island in the Mediterranean is arguably the most beautiful and certainly the most dense with history and humanity. Sicily's complex culture is matched only by its stunning natural beauty and the incredible, diverse landscape: rolling hills and valleys swathed in grapevines, miles of aquamarine coastline and a series of archipelagos that can be reached via a quick boat ride. We will pedal back in time to a colorful and enigmatic past that has never left the island. With Tourissimo, you will see (and taste) the real Sicily. This seductive Mediterranean island has lured conquerors and visitors for centuries. Phoenicians, Greeks, Romans, Arabs, and Normans have all contributed to the many layers of its vibrant culture. Focusing on the most alluring sites on the eastern side of the island, we’ll swim in pristine waters, hike the highest volcano in Europe (Etna) and visit one of Italy’s best-kept secrets: the Aeolean Islands.

Not sure if you can do it? Contact us to schedule a call about how demanding the rides and hikes are or about reserving and E-bike.

• Savor breathtaking views of the Mediterranean

• Travel by private boat with seafood lunch on board

• Visit a wine producer on the island of Lipari, famous for Malvasia

Departure available for private groups or a minimum of six people, or ask for custom dates. 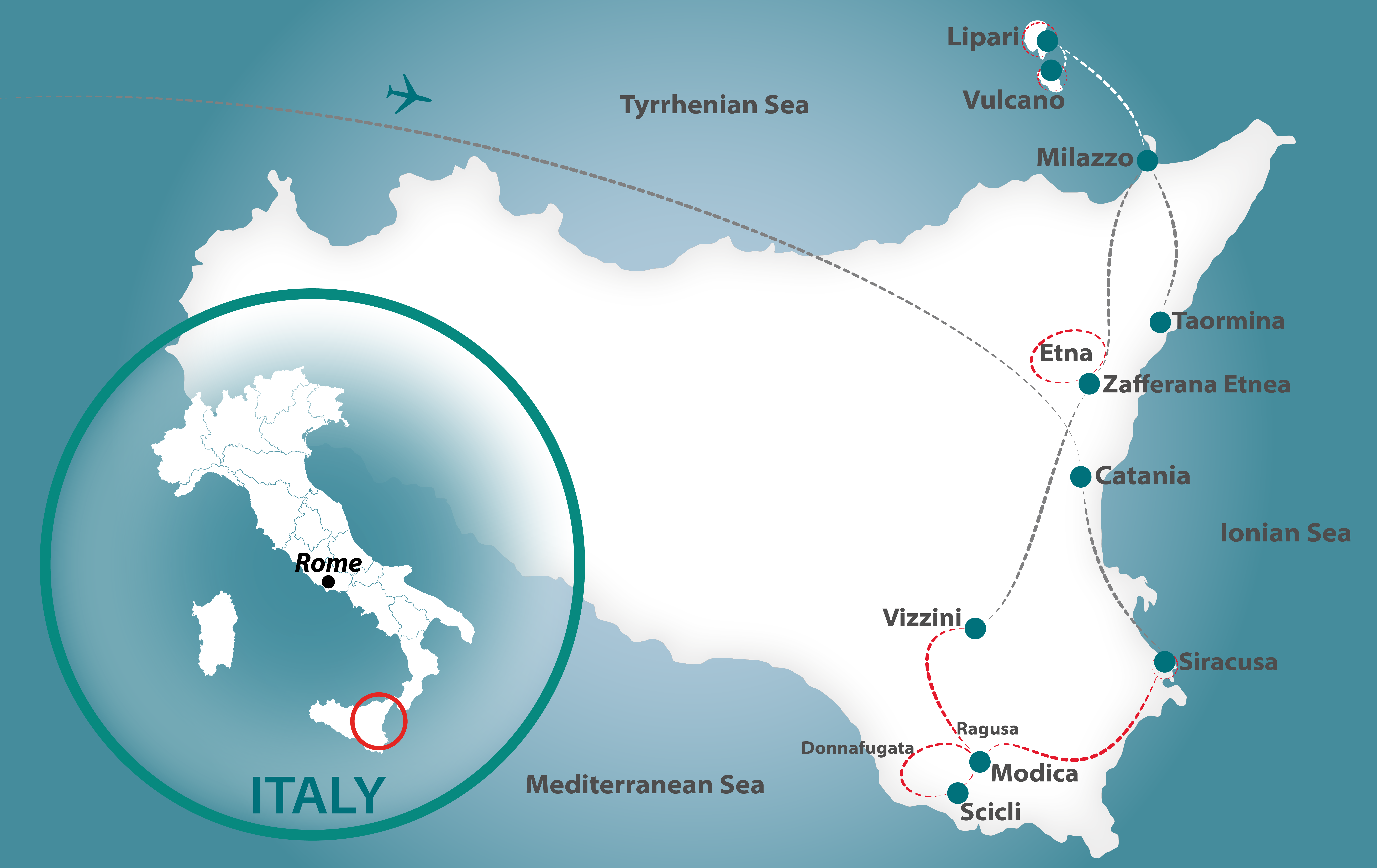 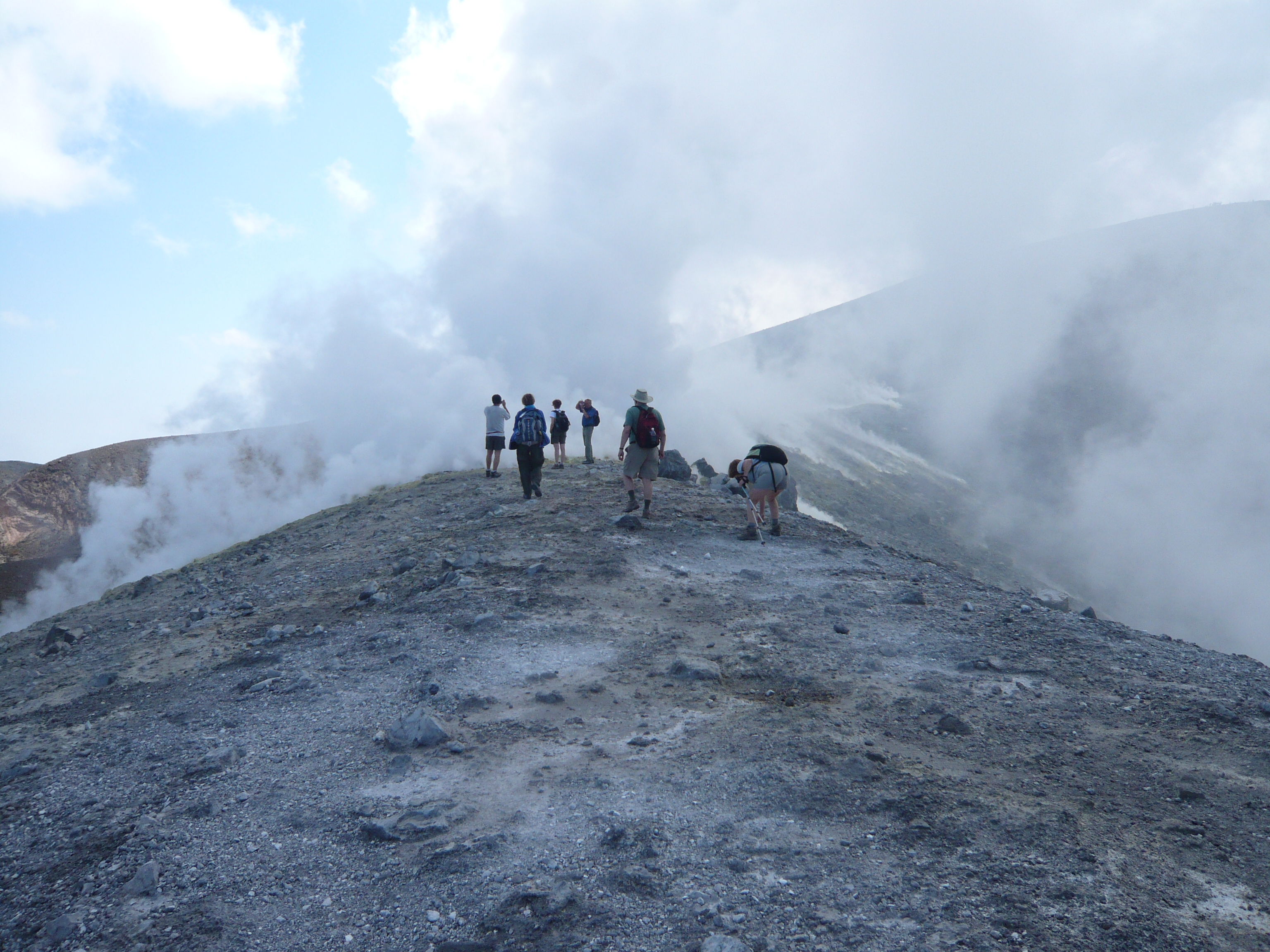 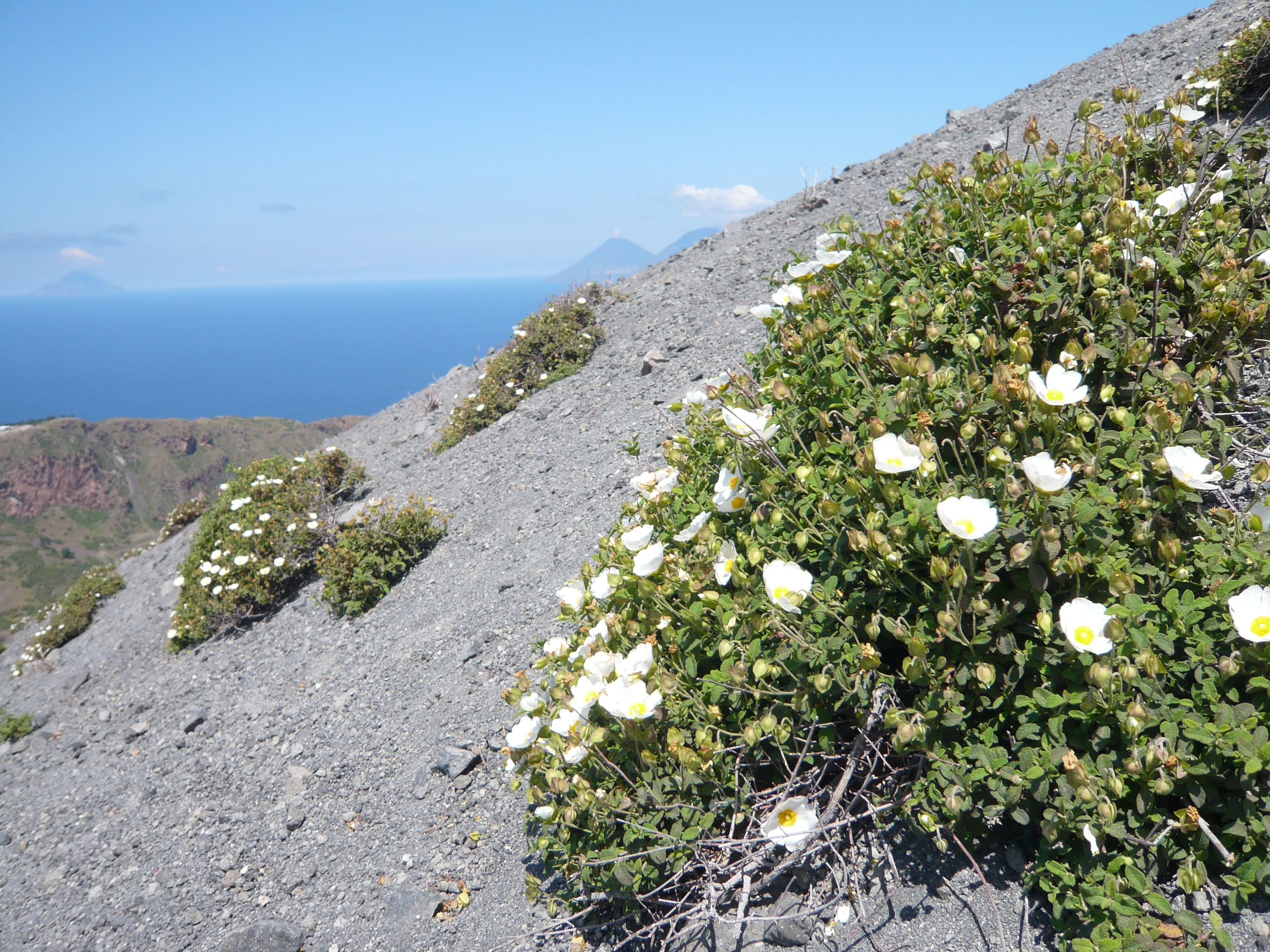 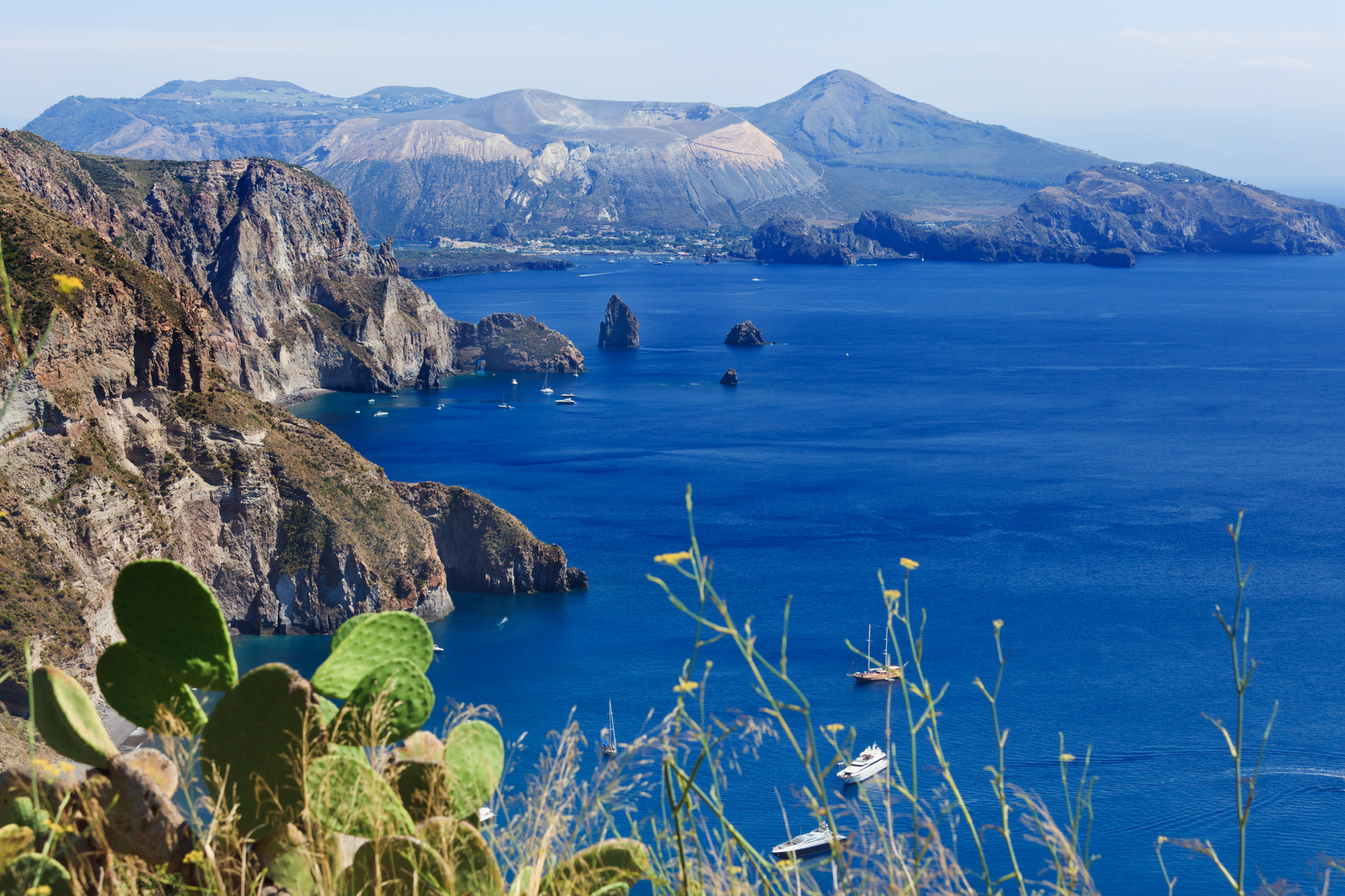 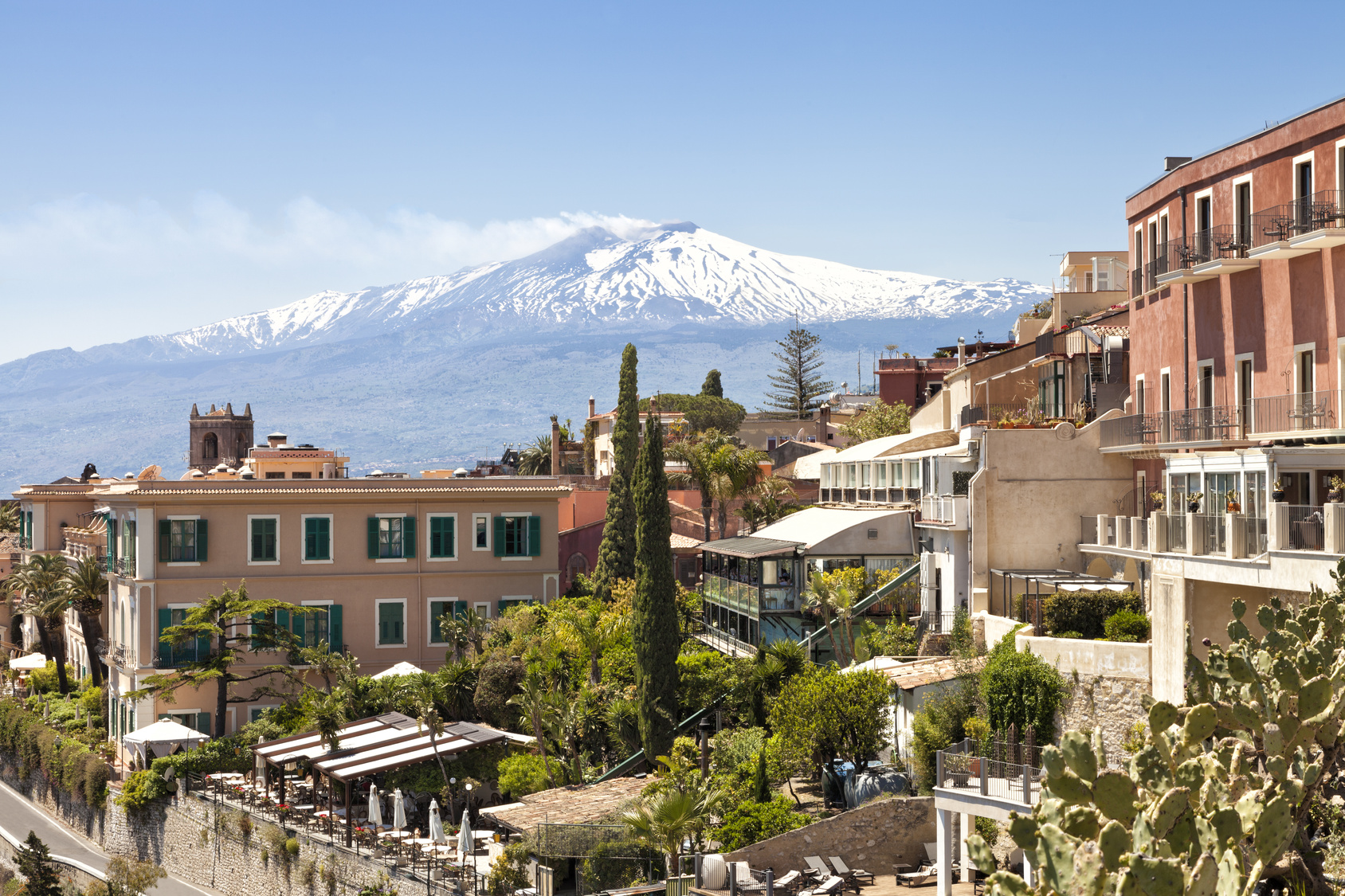 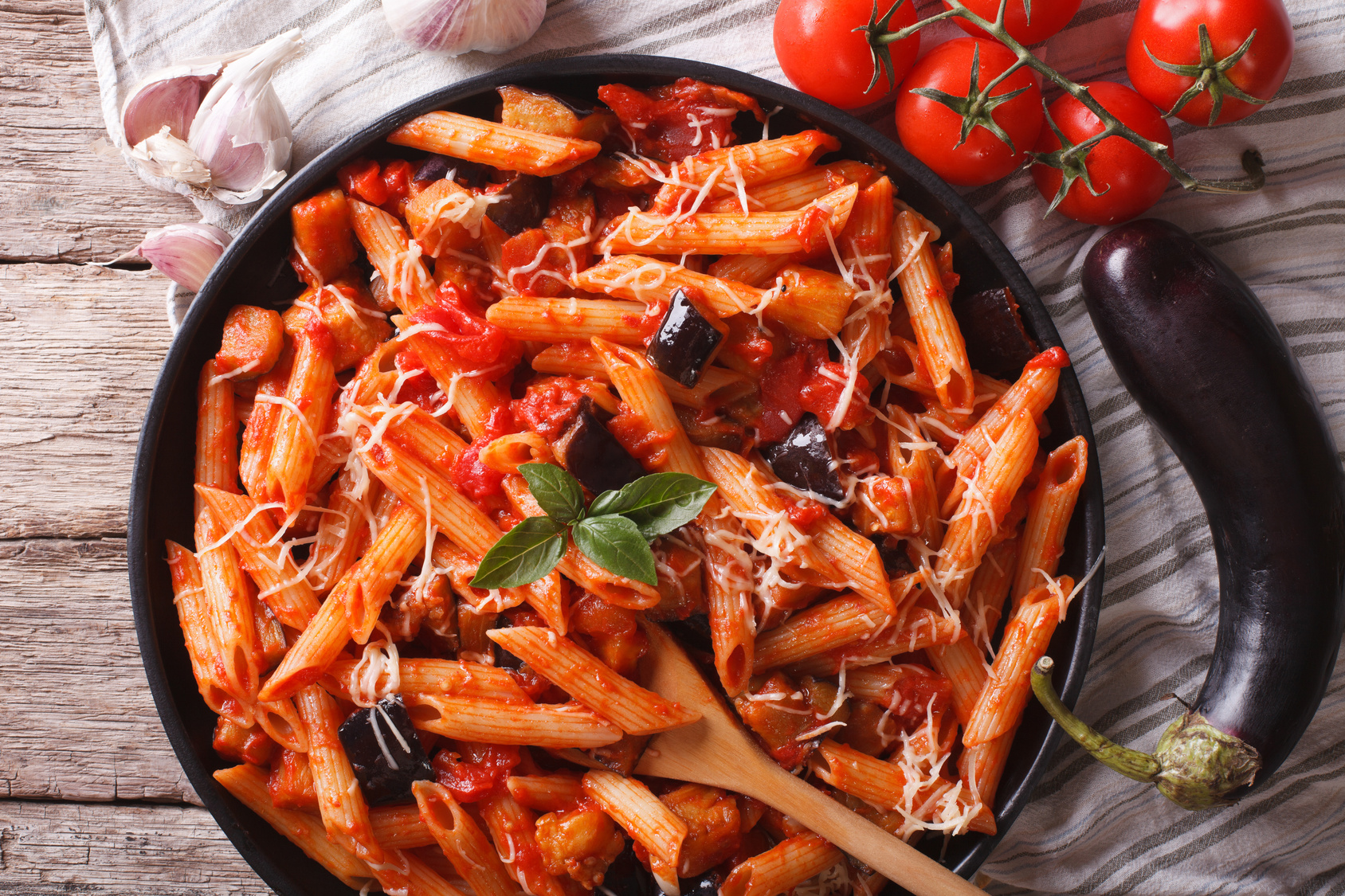 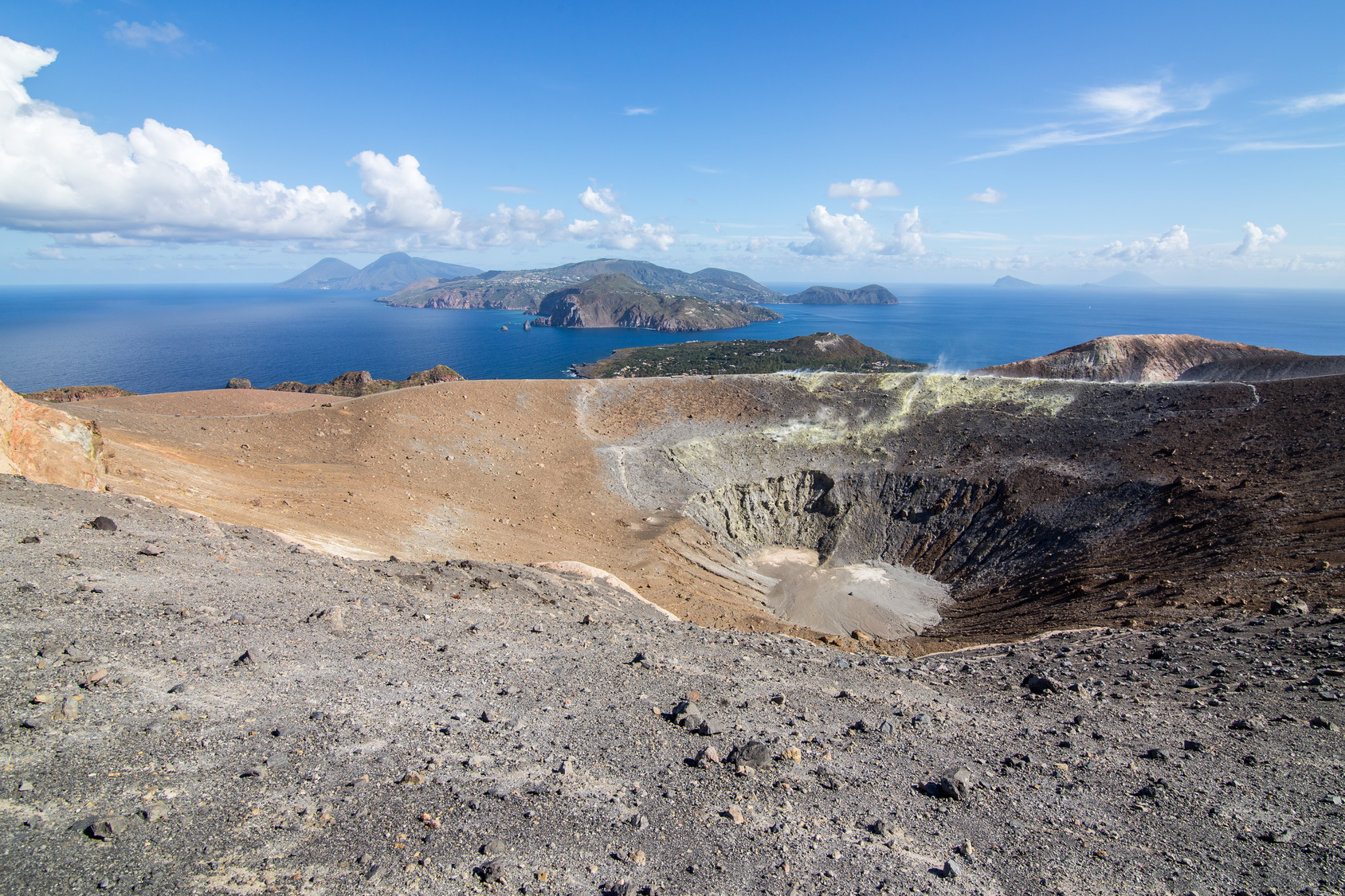 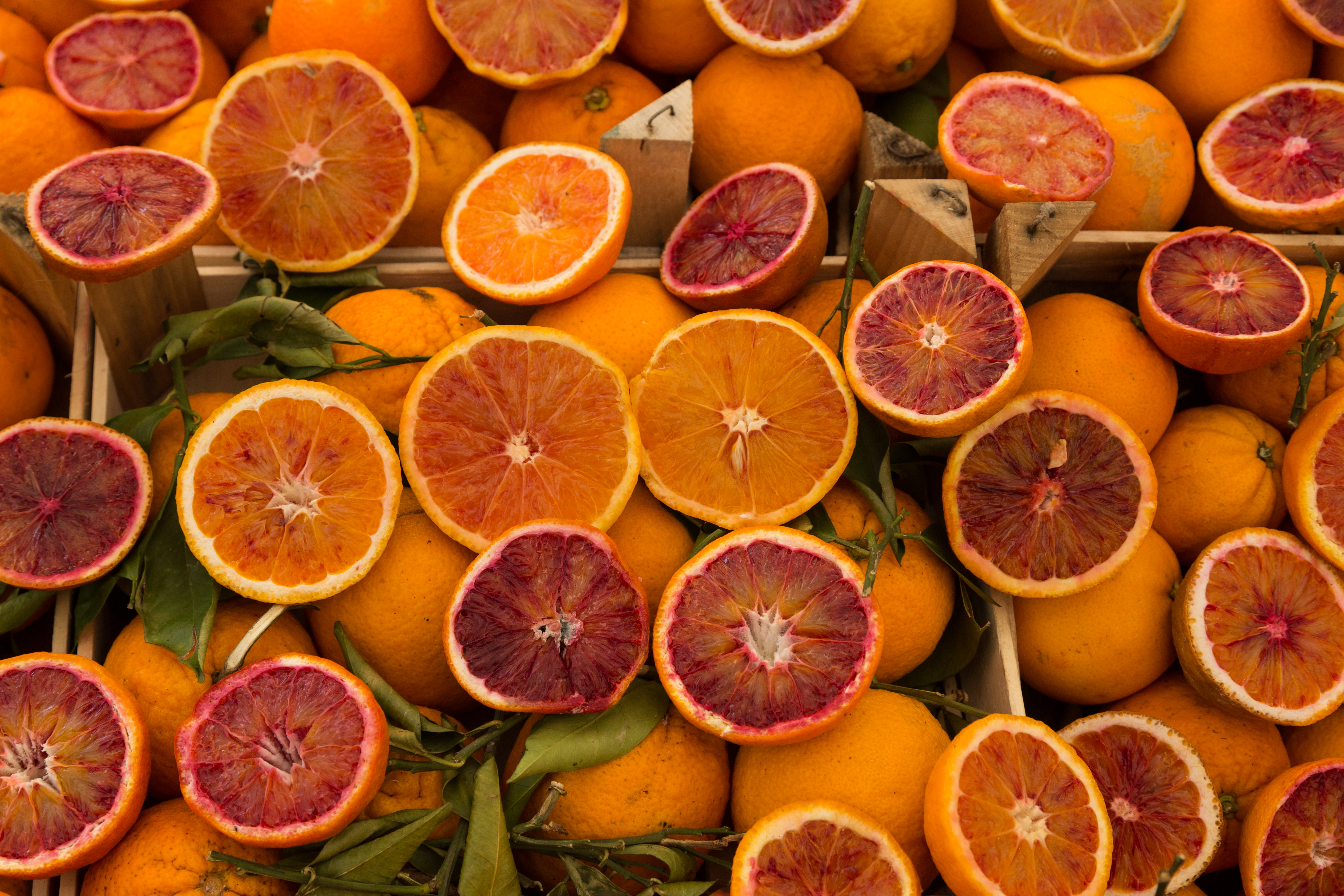 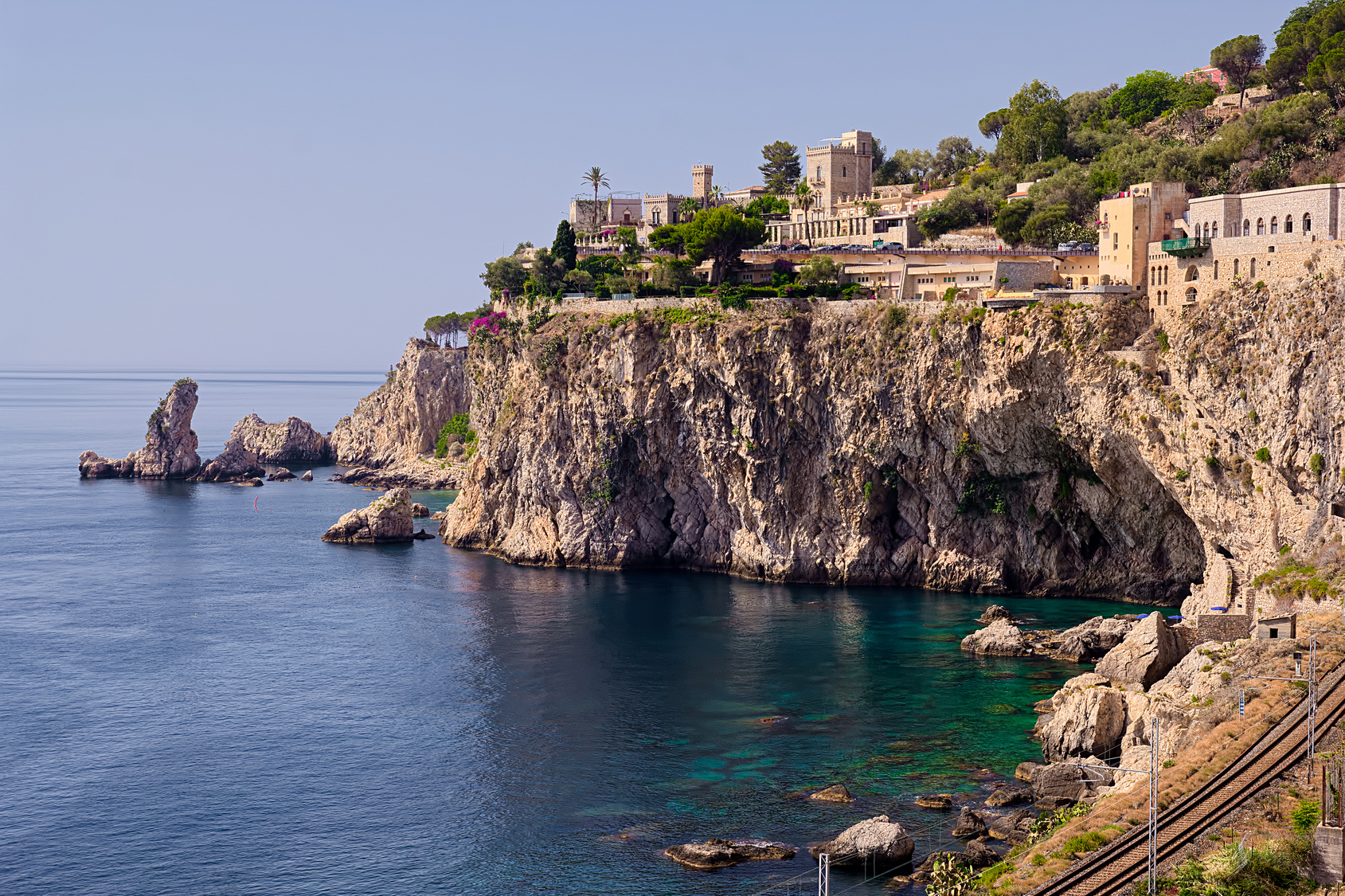 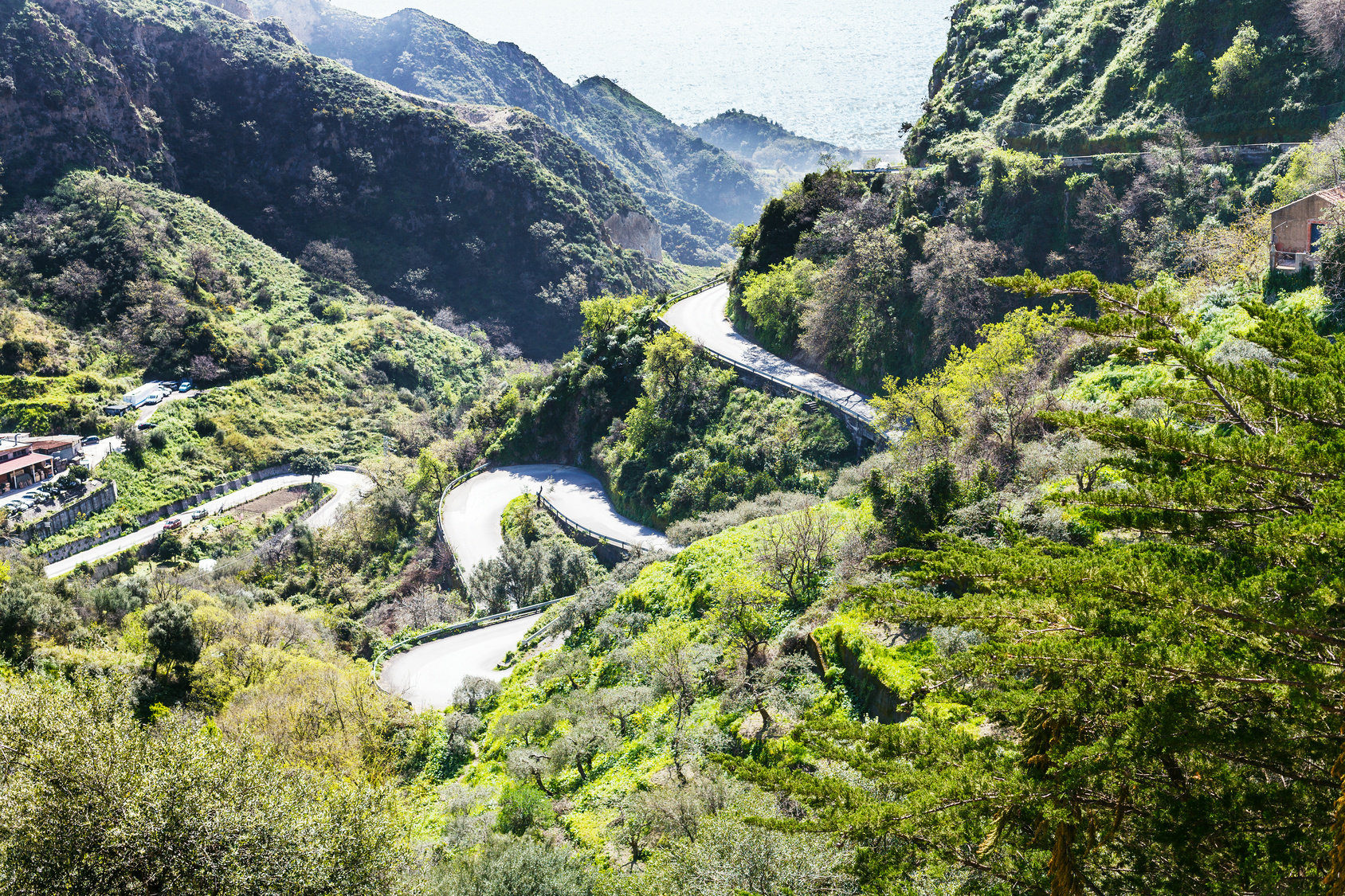 This morning we will pick you up in Catania and drive to Siracusa-Ortigia. Lunch upon arrival in Ortigia and visit of the historical center and of the Greek ruins. In the afternoon, we will go over bike fitting in preparation for tomorrow’s ride. A short (2 mile) ride around Ortigia will afford nice views and the chance the get acquainted with the bikes. Founded by Greek settlers in the 8th century BC, Siracusa grew into an economic and political center in the Mediterranean in the form of a city-state, and as such was at the center of tensions and struggles. Siracusa’s famous 3rd century BC Greek theater, the largest in Italy, offers breathtaking viewa. In the evening, we dine at a typical Sicilian restaurant where we get our first taste of some mouth-watering local specialties.

Today, we have a stunning bike ride that crosses beautiful valleys, green hills, and small canyons. We are entering the Monti Iblei or Hyblaean Mountains, a mountain range in southeastern Sicily. After leaving Siracusa, the landscape gradually changes from gentle hills with Mediterranean vegetation to numerous woods which are intermingled with typical dry stone walls. Olive trees, vines, citrus fruit and almonds, as well as scattered sheep are part of the local scenery.

Pace yourself: the ride is long with several climbs, including a long one to Palazzolo Acreide, an interesting village and our designated lunch stop. If you opt for the short ride you can join the van from here. Otherwise, ride to Modica, one of the most picturesque towns in Sicily. In Modica, we visit the Bonaiuto chocolate shop, one of the oldest on the island. Modica's chocolate is characterized by an ancient and original recipe using manual grinding (rather than conching), which gives the chocolate a peculiar grainy texture and aromatic flavor. It is one of the specialties of the island.

We start today’s ride with a pleasant downhill from the Altopiano Ibleo toward the coast. We stop for a visit of the beautiful Villa (or Castle) Donnafugata, the rural summer vacation house of the Arezzo family, then we continue among carob trees and greenhouses. After a stretch along the coast, we reach Scicli, another great example of baroque reconstruction (it was destroyed by the 1693 earthquake). The economy here is all about agriculture (including winemaking). After lunch we climb back up the valley with great views of Irminio river canyon. If you wish, you can add 20 more miles to reach Ragusa and back. In the evening enjoy a stroll through Modica with dinner featuring an Italian staple no matter the latitude: pizza!

After breakfast, we will set off to reach Vizzini and from there we will transfer to Mount Etna. It’s our last bike ride and after lunch we’ll shift into hiking mode with some snorkeling in the pristine water off of Vulcano Island. The volcanic soil of the Etna slopes (and of most of Sicily for that matter) and the mild, dry climate allow for a wine production that all experts agree to be among the most unique yet underrated. Our hotel is spectacular and it’s also the perfect setting for a wine tasting led by a local sommelier that will guide us through the different local grape varieties and wine. At dinner we’ll cover tomorrow’s logistics and options for the Etna excursion.

This day will be entirely dedicated to Etna. Accompanied by an alpine-volcanology guide, and depending on wind and weather conditions, we will set off on a full-day hike on this marvelous and complex volcano. In the afternoon we will return to our beautiful hotel and take part in a Sicilian cooking lesson an another  memorable dinner.

After breakfast we will head by hydrofoil to the main island of the Aeolean chain: Lipari. Its volcanoes are considered active, and steaming fumaroles and hydrothermal activity can still be seen everywhere on the island. Inhabited since 5,000 B.C, it has been considered a rich island since antiquity because it was one of the few centers in the Mediterranean for trading obsidian, a hard black volcanic glass prized by Neolithic people for the extremely sharp cutting edges that can be achieved. Throughout its history, Lipari has been conquered and inhabited by Arabs, Normans, Greeks, Romans, Spanish and pirates. Particularly impressive is the old Greek Acropolis overlooking the main town, a mighty fortress still standing today. Our day will be dedicated to hiking and exploring the island and visiting the main town of Lipari. We’ll also enjoy a wine tasting at Cantina Castellaro.

[fa icon="plus"] Day 7
Vulcano - 3 hr hike
After breakfast we set off by private boat to explore the island of Vulcano. We will hike up and around its grandiose crater and then experience a scenic lunch onboard and snorkeling in the pristine water. Our captain, Nando, will take us to his favorite corners and will share how life is as a fisherman in the Aeolean Islands. Return to Lipari in the afternoon and free time before dinner.
[fa icon="plus"] Day 8

Today we say goodbye to the Aeolean archipelago and head back to the main island of Sicily. Our tour would not be complete without the charming town of Taormina, famous for its medieval alleys and its Greek theater which hosts the most amazing scenographic background in the world: the Sicilian blue coastline and the whole greatness of the Etna volcano. In the 20th century Taormina became a colony of expatriate artists, writers and intellectuals, attracted by its mild climate and luscious landscape, who built their magnificent villas around its promontory and helped intensify its reputation as one of the most glamorous towns in Italy. We’ll offer a cultural walk of town with its elegant buildings and 3rd century BC Greek amphitheater, still in use today for concerts. Farewell dinner and celebrations.

After breakfast you will be transferred to the Catania airport according to your travel plans and flight schedule.

• All accommodations with breakfast

• Walking tour of Ortigia and Taormina

• Cooking demonstration with a local chef 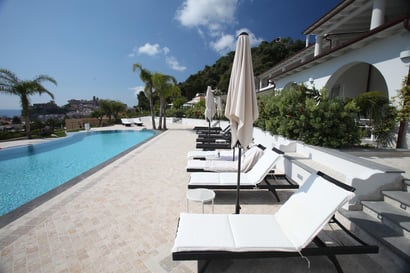 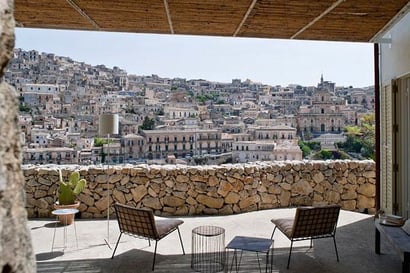 Etna, also known by Sicilians as ‘Mongibello’ (The Beautiful Mountain), is located on the east coast of Sicily, in the province of Catania. It is the highest volcano in Europe at more than 11,000 feet (3,350 meters). It erupts from the four main summit craters, and has an activity which is both effusive (with liquid magma flows) and explosive: not infrequently, it can "spit" dense columns of ash and gas visible even from space satellites, launching the rocks produced by its eruptions into the surrounding areas. For this reason the region is particularly fertile and the cheeses and wines we will savor will confirm that Sicily is a small piece of paradise.